Yours, Mine and Ours

The kids try to break up the parents, and then end up succeeding just when they realize that they like being in this family and that their parents were happy together. Frank (Dennis Quaid) takes up an offer to lead a ship in the Coast Guard, and leaves. The older kids get on a boat to go and stop him while the little kids stay at home. After Helen (Rene Russo) rescues them from nearly falling out of a window, they confess that they caused the breakup, and Helen sends them to Frank. They tell him what really happened, and just as he is saying that Helen will never take him back, he looks up and sees the light from the lighthouse they live in lit, just like the story he told Helen that a sailor’s wife lived in a lighthouse and as long as the light was still lit, she was his. They marry again. 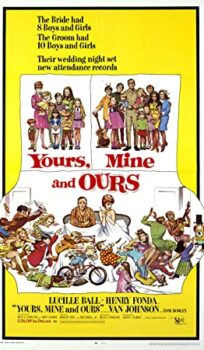