SHORT VERSION:
Dr. Carver captures Zeus intending to use him as bait to capture Roxanne, despite knowing that it is illegal to catch a dolphin in the open sea. When his assistants quit in disgust after hearing his plan, he hires a drunk sailor to help him out. However, thanks to the combined ingenuity of the two animals, Carver and the sailor get caught in the net they were going to use on Roxanne and are later arrested, due to his ex-assistants telling Mary Beth’s assistant Becky about his scheme and she in turn contacting the police. Roxanne then finds Mary Beth trapped in her submersible, which is slowly flooding because of a drift net caught in the hatch, and she communicates to Roxanne to go to the surface and get help. She goes up to her boat and finds Terry, his son, and her daughters arriving there looking for her, and she motions for Terry to follow her. After he sees Mary Beth’s predicament, he gets a knife from the boat, cuts the net off of the hatch, and gets Mary Beth safely to the surface.

Terry and Mary Beth later get married, and before they kiss, Mary Beth gets a letter from a courier stating that she has been awarded the coveted Rockland research grant. Roxanne then appears and shows Zeus that she has found a pod to join, and Zeus apparently encourages her to go with them. Mary Beth tosses her the bouquet, and then she swims off with her new pod.

LONG VERSION:
Dr. Carver (Arnold Vosloo) ends up capturing Zeus, plotting to use him to get Roxanne to come to him so he can catch her with a net, despite knowing that it is illegal to capture a dolphin in the open sea. After sharing this plan with his assistants Linda (Shannon K. Foley) and Phil (Jim R. Coleman), they quit in disgust, so he hires some random sailor to help him out.

Meanwhile, Mary Beth (Kathleen Quinlan) – who got a call from her assistant Becky (Dawn McMillan) saying that a dolphin was found dead in a drift net – sets out to sea intending to find and keep Roxanne away from the nets. Linda and Phil find Becky and enlighten her to what Carver plans to do, so she notifies the authorities. A short time later, she crosses paths with Terry (Steve Guttenberg), Jordan (Miko Hughes), Judith (Majandra Delfino) and Nora (Jessica Howell), who have just shown up at the institute to look for Mary Beth, and after she tells them where she went off to, they set out in a motorboat to find her.

Roxanne shows up at Carver’s boat, but when Carver and the sailor try to drop the net down onto her, she evades it. As Carver and the sailor ready the net for a second attempt, Zeus and Roxanne communicate something to each other, and Roxanne proceeds to dive down and then charge up to the surface, jumping high out of the water into the direction of the antagonists. Frightened, they fall backwards into the net and get stuck. Roxanne then heads off for elsewhere, leaving Zeus to toy around with them until Becky, Linda, and Phil show up with the police to arrest them both.

While out looking for Roxanne in her submersible, she gets the propellers caught in a drift net. She tries to escape through the hatch, but discovers that the net is also blocking the hatch door. Some of the net then gets stuck in the frame when she closes it back up, causing the sub to slowly flood. A short time later, Roxanne swims by, so she gets her attention and communicates to her that she must go to the surface and fetch help. Roxanne goes up to Mary Beth’s boat and finds Terry and the kids, who have just arrived there, and she motions for Terry to follow her. Terry goes down with her, and after seeing Mary Beth’s predicament, he gets a knife from the boat, cuts the net covering the hatch, and gets Mary Beth safely to the surface.

Terry and Mary Beth later wed, and before they kiss, a courier shows up with an envelope for the latter. She opens it to find that she has been awarded the coveted Rockland research grant. Roxanne then appears, and she shows Zeus that she has found a pod to join, so Zeus apparently communicates to her to go with them. Mary Beth tosses the bouquet to Roxanne, and she then swims off with her new pod. 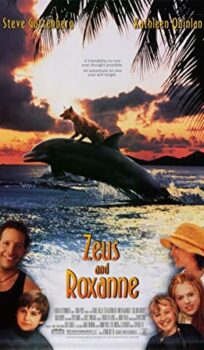