The movie begins with a voiceover revealing that Zulu warriors in South Africa have decimated a British force at the Battle of Isandiwana, acquiring their rifles.  A company of 150 British soldiers realize they are next in the line of the 4000 warrior Zulu army.  They have too many sick and wounded to outrun the Zulus. They prepare a fortified position of defense at Rorke’s drift, a missionary station.  They are led by Lt. Chard and Lt. Bromhead (Michael Caine).

The mission preacher discourages the British soldiers with his constant predictions of their doom and destruction.  A group of Boer horsemen arrive.  The Boers say the position is hopeless and refuse to stay and fight alongside the British.

The British withstand numerous attacks over the course of a day and night.  Almost every man is injured.  They are exhausted and low on ammunition when they see the Zulus line up again.  However, the Zulus have also suffered very high casualties.  The Zulus sing a song in recognition of the bravery of their opponents, then leave. 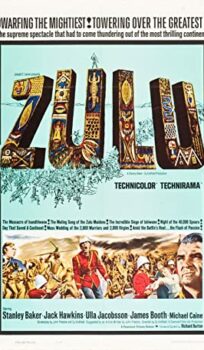