Howard (John Goodman) is truly hiding from a real alien attack that includes a chemical weapon that renders the air temporarily toxic.

Unfortunately, Howard is also a psychotic, murdering kidnapper. He deliberately rammed Michelle’s (Mary Elisabeth Winstead) car off the road and took her to his bunker where he planned to play house and eventually kill her like he killed a previous girl, Brittany.

Howard’s plans were upended by the alien attack and by the arrival of Emmett (John Gallagher, Jr.) who forced his way into the bunker at the start of the invasion.

When Michelle and Emmett discover that Brittany is actually the “Megan” that Howard claims was his estranged daughter, they plan their escape.

Michelle builds a makeshift Hazmat suit out of the shower curtain. When Howard discovers the scissors and utility knife they are using, Emmett covers for Michelle by telling Howard that he was making a weapon to try to get Howard’s gun away. Howard summarily executes Emmett by shooting him in the head and dissolves the body in a barrel of perchloric acid.

As Howard attempts to play house now that Emmett is dead, he discovers the Hazmat suit. Michelle dumps the perchlorate barrel causing Howard to slip and fall in it as well as short some electrical wiring. Michelle crawls through the duct, dons the suit, freezes and cracks the lock to the hatch and escapes. The bunker explodes and presumably kills Howard.

The bunker explosion attracts a flying alien spaceship. Michelle hides in Howard’s truck where she makes a makeshift Molotov cocktail out of a bottle of Glenmorangie. When the alien ship lifts the truck to eat it, Michelle throws the Molotov cocktail into its maw, destroying the ship and forcing it to drop the truck.

Michelle takes the car of the woman who died trying to get into the bunker earlier in the film. She hears that their are survivors in Houston that need help and heads in that direction. 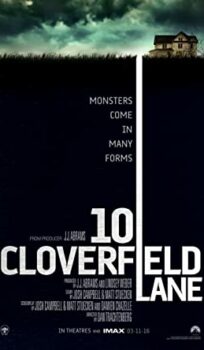