Kat (Julia Stiles) reveals to Bianca (Larisa Oleynik) that she went out with Joey (Andrew Keegan) in the 9th grade for a month, and actually slept with him, because engaging in sex was what everyone else was doing. After that, she told him she didn’t want to anymore because she wasn’t ready, which made Joey mad and he dumped her. After that, she swore to never do anything just because everyone else was doing it, which explains her current behavior. She also warned Joey not to tell anyone, because if he did, the cheerleading squad would find out how tiny his penis is.

At the prom, after seeing Cameron (Joseph Gordon-Levitt) with Bianca, Joey confronts Patrick (Heath Ledger) and tells him he didn’t pay him to take out Kat so Bianca could end up with another guy. Kat overhears this and storms out. After watching Kat leave and Patrick take off after her, Michael (David Krumholtz) warns Cameron of the situation, so they go to talk to Joey. Joey throws Michael down and tells Cameron he and Bianca were going to pay. Cameron tells him he crossed the line, so Joey punches him to the floor. Bianca then gets Joey’s attention and punches Joey in his nose and left eye, and then knees him in the crotch. She pulls Cameron up, and the two kiss. Outside the dance room, Patrick tries to explain to Kat that he cared about her and not the money, and kisses her, but Kat pushes him away in disgust and quickly leaves.

The next day, Bianca goes out sailing with Cameron, and Bianca and Kat’s dad Walter (Larry Miller) talks to Kat. Kat tells him Bianca beat up Joey at the prom, which actually impresses him, and then he admits that he can’t control their lives and the decisions they make no matter how hard he tries to. He then gives his blessing to Kat wanting to attend university out east.

The next day in poetry class at school, Kat recites her poem directed at Patrick called “10 Things I Hate About You” and leaves in tears after reciting it. Later in the day, she goes to her car and finds the guitar she had been wanting for some time, a Fender Stratocaster, in the front seat. Patrick shows up, saying he bought it for her with some extra cash he had on him from Joey paying him to take her out. He tells her he fell for her during their time together. They kiss and make up while the camera pans to the top of the school, where Kat’s favorite band is singing. 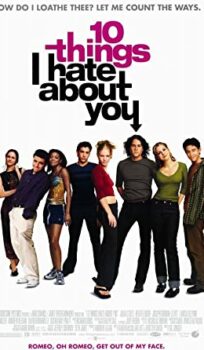