Long version:
D’Leh (Steven Strait) manages to rally several tribes as he is the chosen one. They manage to find the Demon tribe’s home at the “snake’s head” in the desert (very reminiscent of ancient Egypt, which has the captured members of all tribes working as slaves to build the pyramids).

The Demon’s leader, the Pyramid God (Tim Barlow), realizes that D’Leh and his woman Evolet (Camilla Belle) each fulfill an individual prophecy of ones who will destroy his kingdom. Outside, D’Leh and the tribesmen interfere with the building of the pyramids (by agitating the mammoths causing them to run amok), and manage to get to the Pyramid God’s temple. In the process, D’Leh’s adversary-turned-ally Ka’Ren is killed, as well as his mentor Tiktik.

The Pyramid God ties Evolet to two horses and tells D’Leh that if he agrees to leave, he will be allowed to take his woman. D’Leh agrees, if and only if the rest of the slaves are freed. When the Pyramid God refuses, D’Leh throws his spear into the Pyramid God, proving to everyone that he is no more than a mortal man.

In the confusion of mutiny, Evolet is shot by the Warlord (Affif Ben Badra). Though it seems like she has died, D’Leh manages to communicate with his tribe’s Old Mother (Mona Hammond), who has been watching everything through the eyes of the animals (the mammoths, the birds, and the Sabertooth cat). The Old Mother tells their gods to give her remaining life-force to Evolet, and as she dies, Evolet is revived. D’Leh and Evolet embrace. The tribes part ways, and D’Leh takes his place as leader of the tribe, while Evolet comes to be the new wisewoman. 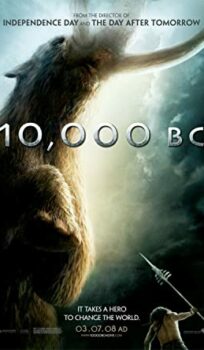