Pooper:
Shinzaemon kills Hanbei and Naritsugu, sacrificing his own life in the process. Shinzaemon’s nephew Shinrokuro and the wanderer Koyata are the only ones from either side to survive the battle. The Shogunate and samurai system crumble completely a short time later.

Long Ending:
This remake takes place in Japan, where a psychotic man named Lord Naritsugu Matsudaira (Gorô Inagaki) is quickly rising to power. He has no regard for human life, raping, torturing and murdering his subjects with reckles abandon. Despite his violent ways, he continues to rise through the ranks of the ruling Shogunate.

Knowing that he must be stopped, a senior government official named Sir Doi secretly contacts a crafty mercenary samurai named Shimada Shinzaemon (Kôji Yakusho). Lord Doi has Shinzaemon speak to two of Naritsugu’s victims. After meeting the victims, Shinzaemon vows to kill Naritsugu in the name of the people. Sir Doi says that the assassination must take place before Naritsugu before he returns home to Edo.

Shinzaemon begins recruiting true samurai to help him on his quest (noting that many samurai are now inadequate, and few have ever faced battle). He recruits an old friend, as well as a former student (and that student’s students). He also convinces his jaded nephew Shinrokuro Shimada (Takayuki Yamada) to join. They are lastly joined by an eager young apprentice samurai and an old mercenary who is skilled with a spear. The 12 men begin to train to overcome great odds, as Naritsugu is constantly protected by a well-armed militia. The leader of Naritsugu’s militia is a samurai named Hanbei Kito (Masachika Ichimura) who is honorable and an old training partner of Shinzaemon. Hanbei manages to discover that Shinzaemon is going to launch an assassination attempt on Naritsugu. Although Hanbei is disgusted with Naritsugu, he says he is bound to sacrifice his life for his master.

Shinzaemon eventually crafts a plan to force Naritsugu’s forces (numbering about 70) to take a detour through a small mining village, where Shinzaemon and his band will ambush them. As the samurai journey to the village, they meet a crazy hunter named Koyata Kiga (Yûsuke Iseya) in the woods. Koyata forces his way into the group, becoming the 13th assassin.

Once Naritsugu’s forces are forced to change their route, Hanbei becomes suspicious of a trap. Accordingly, Hanbei retains an additional force of over 200 soldiers to accompany them into the small village where Shinzaemon lies in wait. When they arrive, Shinzaemon and company attack, gaining the early advantage thanks to many traps that they had prepared. Shinzaemon orders his men to kill every last soldier. Eventually, all of the men are killed except for Shinzaemon, Shinrokuro, Hanbei and Naritsugu.

After a duel, Shinzaemon beheads Hanbei in battle. Naritsugu unsheaths his blade after disrespectfully kicking Hanbei’s head aside (wholly unappreciative of Hanbei’s sacrifice). Naritsugu says that if he survives, he will be sure to plunge Japan back into an era of war as he finds this battle to be so exciting. Enraged, Shinzaemon attacks, allowing himself to be dealt a fatal blow so he can get close enough to Naritsugu to inflict maximum damage. Naritsugu cries over his mortality before Shinzaemon beheads him. Shinzaemon dies in Shinrokuro’s arms, telling Shinrokuro to live his life as he sees fit and not to be bound by the samurai code.

Shinrokuro walks through the battlefield, disgusted by the slaughter. He meets Koyata who has somehow survived some seemingly fatal blows (it is suggested that Koyata may, in fact, be an immortal spirit of some sort). The two men part ways and Shinrokuro keeps his samurai sword, having seemingly found the honor that his life had seemingly lacked. Subtitles appear telling the viewer that the Shogunate and samurai system crumbled and were replaced by a modern government a short time after the battle. 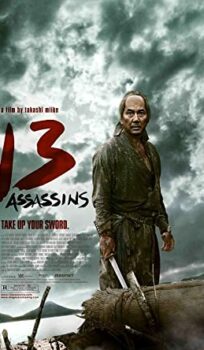