Lucy (Judy Greer), claiming Jenna’s (Jennifer Garner) idea and photos as her own, sells them to Sparkle Magazine. Jenna goes to Matt’s (Mark Ruffalo’s) house and professes her love for him, but he turns her down saying that he already chose Wendy (Lynn Collins). He once again gives her the dollhouse he gave her 13th birthday party. She takes it home and cries. The remaining wishing dust is blown around by the wind.

Suddenly, it’s back in the 1980s, about a minute before young Jenna (Shana Dowdeswell) left. When young Matt (Jack Salvatore Jr.) opens the closet, Jenna pops out and kisses him. She then confronts young Lucy aka TomTom (Alexandra Kyle). 17 years later, Jenna and Matt are getting married and live a house that looks just like the dream house. 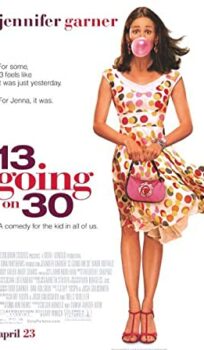