SHORT VERSION: thanks Sean
Mike Enslin (John Cusack) survives the hour within the room, but realizes the evil force within the room will just keep repeating the hour of hauntings until he “checks out” (kills himself). Mike decides to send the room down with him, so he sets it ablaze. Firefighters come and pull him out of the burning room and Mike is reunited with his estranged wife Lily (Mary McCormack). Mike finishes his book about the hauntings in 1408 and we find out the hotel is currently closed down (probably as a result of the fire). Mike finds his tape recorder in a box of items recovered from the room. He plays the tape and, much to his wife’s shock, hears a conversation he had in the room with his dead daughter.

(note: Samuel L. Jackson’s role is essentially an extended cameo at the start. He does make an appearance in the hotel room, but it appears to be just a hallucination)

LONG VERSION: thanks V.K.
Mike Enslin (John Cusack) is a skeptic that has made it his personal mission to debunk supposedly supernatural hot spots through various, seldom-read novels.  His motivation comes from remorse over his daughter’s death, Katie, and a resentment that if something divine did exist then it let her die.  An anonymous sender mails him a card warning him not to visit the Dolphin Hotel and stay in Room 1408 which he accepts as a challenge.  After much pleading with the hotel’s manager (Samuel L. Jackson) he gets to stay in the room which he is warned that there have been 56 deaths in and no one has survived more than an hour.

The events start normally but quickly spiral down from the clock counting down to an hour, to apparitions attacking John, to the room freezing and then flooding, to what he thought was an escape only to be brought back in the room, to something impersonating his daughter appearing to him and then dying in his arms. However, through all of the psychological torture Mike survives the hour, only for it to restart the countdown for another hour.  A phone call from the room tells him to just kill himself already because it will continue until he does.

Mike instead sets the room on fire which evacuates the hotel, summons the firemen, and prevents his separated wife (Mary McCormack) from trying to come to the room which had hijacked a phone call from Mike and told her to come. She arrives at the Dolphin and begs for the fireman to rescue Mike from the burning room which they are able to do and he escapes with only minor injuries.

The film ends with Mike completing his novel with a special section backtracking on his skepticism and giving reference to room 1408 for it.  He then plays back his tape recording of the room with his wife that has the conversation of him and his deceased daughter, proving that the events were real.

DVD ALTERNATE ENDING VERSION: thanks Sean
Mike Enslin (John Cusack) survives the hour within the room, but realizes the evil force within the room will just keep repeating the hour of hauntings until he “checks out” (kills himself). Mike decides to send the room down with him, so he sets it ablaze and is killed in the fire. At Enslin’s funeral, the hotel’s manager, Gerald Olin (Samuel L. Jackson) attempts to give Enslin’s recovered items to his wife (Mary McCormack). He tells her what her husband did would allow the room to be reopened, which results in Olin being angrily sent away by Enslin’s publisher (Tony Shalhoub). Olin gets back into his car and finds Olin’s tape recorder in the box of recovered items. He plays the tape and hears a conversation Enslin had in the room with his dead daughter. Olin then looks in his rear-view mirror and is shocked an image of a badly burned Enslin. After looking again, Olin sees that Enslin is gone before driving away. The final shot is through the window of 1408, where we see the ghost of Enslin walking around. 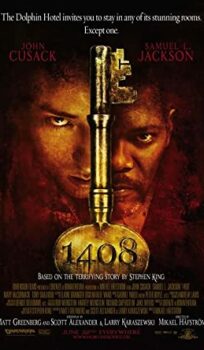