At the game, while watching from the bleachers with Maggie (Michelle Trachtenberg), Scarlet (Leslie Mann) sees Mike (Zac Efron) gesture a pass which she remembered him performing back in high school; it is then that she finally comes to realize he is indeed her husband, so she gets up and walks away. Then, Mike starts having flashbacks of his situation throughout the movie -the turning point when he changed college for a life with Scarlett, his encounter with the “spirit janitor”, etc.- and decides to do the right thing; he passes the baton to his son, Alex (Sterling Knight), who gets called into the game, and runs after Scarlet.

Upon coming close to the exit, he transforms back into his 37-year-old self (Matthew Perry), which Scarlet sees. They meet again, he confesses his regret for messing it up with his family and vows to make it up to everyone. They kiss and walk away together. THE END.

Then, a second epilogue shows adult Mike, on his way of moving back to his own house, going to Ned’s (Thomas Lennon’s) room to thank him for everything, and then he finds him with Principal Masterson (Melora Hardin) in his bed -they both had made up at that game, too-. It so happens that Mike was hired as the basketball team coach, and Ned gives him a fancy looking whistle as a present. 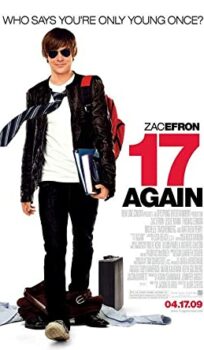