POOPER:
John Adams agrees to remove the clause that would free the slaves in order to get the southern colonies to approve the motion.  Pennsylvania is the last colony to vote yes, and the entire Continental Congress signs the Declaration of Independence on July 4.

LONG VERSION:
Set in colonial Philadelphia, the Continental Congress is debating trivial matters while John Adams (William Daniels) of the Massachusetts delegation is constantly demanding that the Congress discuss independence from Great Britain.  The lead opponents to talking of independence are John Dickinson and James Wilson of the Pennsylvania delegation, who are hoping for reconciliation.  The third member of that delegation is Benjamin Franklin (Howard Da Silva), who is in support of independence.  He tells Adams that the Congress might agree to discuss independence if another colony brings forward the motion.  Adams and Franklin convince Richard Lee of Virginia to get approval from the Virginia legislature to propose independence.  Weeks later, Lee returns with the approval, and Congress begins to discuss independence from Great Britain.

Because the vote for independence must be unanimous, and not all of the colonies are in support of it, Adams, Franklin, and Lee get the Congress to postpone the vote so that an official declaration can be written.  Since Lee has to return to Virginia to take office as its governor, he nominates his fellow delegate Thomas Jefferson (Ken Howard) to write the declaration.  Jefferson wants to return home, so Adams calls for his wife Martha (Blythe Danner) to join them in Philadelphia.  Her presence gives Jefferson the motivation to write the declaration.  Meanwhile, Adams and Franklin begin to work on convincing the delegates of the colonies against independence to change their minds.

With the declaration finished, Adams, Franklin, and Jefferson return to Congress to debate what should and should not be in it.  They agree to change a few things, but the big debate occurs when slavery is brought up.  In Jefferson’s draft, all slaves would be freed, but the three Southern-most colonies (North Carolina, South Carolina, and Georgia) are against it.  When Adams refuses to cut that part out, those three delegations walk out.  Franklin tells Adams that getting independence is the most important thing, and the issue of slavery will have to be worked out at a later time.  When the three colonies all agree to support independence if the slavery clause is removed, Adams scratches it out himself.

Thanks to their convincing, 11 of the 13 colonies will now support independence.  Only New York, which abstains from every vote because their legislature has not given them any direction as how to vote, and Pennsylvania are against it.  Franklin calls for a poll of the Pennsylvania delegation, with himself voting yes and Dickinson voting no.  Wilson, who had been following Dickinson’s lead all this time, declares that he doesn’t want to go down in history as the man who prevented American independence and changes his vote to yes.  The official vote is 12-0 with one abstention in favor of independence.

The next day, July 4, a revised version of the declaration with all the agreed-upon changes is brought to the Congress.  John Hancock, the President of the Continental Congress, signs it first and announces all the delegates who supported independence must sign it.  With the news that the British army has invaded New York City and the lead delegate’s home was destroyed by them, the New York delegation officially takes back it’s abstention and votes in favor of independence.  The movie ends with all of the members of the Continental Congress signing the Declaration of Independence. 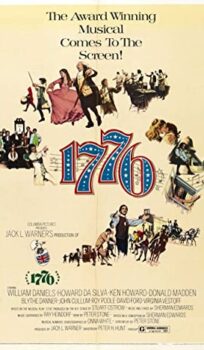