The paper we see vice cop Alvin (Jeff Bridges) cursing about at the beginning of the movie is his suspension notice; he is being removed from active duty for erratic behavior. The last we see of him, he’s breaking down in his house over everything that’s gone wrong in his life.

Helga (Charlize Theron) and Lee (James Spader) were hired by Becky (Teri Hatcher) to kill her ex, Roy (Peter Horton) for half his life insurance policy plus $30k. Lee hired Dosmo (Danny Aielo), a washed-up mob man, to use as a fall guy, though Dosmo escapes Lee’s plan to kill him without Lee’s knowledge. He makes it to Alan’s (Greg Cruttwell) house, where he takes Alan and his personal assistant, Susan (Glenne Headly), hostage.

Teddy (Paul Mazursky) is a has-been movie directory and writer. He plans to kill himself at a military cemetary, at his mother’s grave. Abandoning his small dog troubles him, though, and when nurse Audrey (Marsha Mason) arrives to pay her respects at someone’s grave, he tries to convince her to take the dog. She gets him to come with her, to meet the person she’s giving her dog to–her brother, Alan. They arrive at Alan’s house, and are taken hostage by Dosmo as well. Dosmo knocks out Alan, then takes everyone else for a car trip to Becky’s house in his search for revenge on Lee.

Unfortunately for Roy and Helga, the payment for the hit was in Becky’s house, where they killed Roy, so it’s now being examined by two detectives (Ada Maris and Keith Carradine). Lee goes to get the money, leaving Helga and Becky to wait in a motel. He kills the detectives on the scene, but then vice cop Wes (Eric Stoltz)–Alan’s partner–arrives. He and Alvin found Becky earlier, and he was curious about the crime and wanted to talk to the investigating detectives. He thinks Becky is involved, but isn’t sure how he can prove it.

Helga and Becky get into an incredible catfight which ends with Becky shooting Helga in the abdomen and then fleeing. Helga limps to Becky’s house, saving Wes from being killed (instead Lee just knocks him out cold). Lee says he can’t risk taking Helga to a doctor, then when he’s about to kill her, his gun jams. She escapes, and though he follows to finish her, she makes it to the road and flags down some drivers-by, including Dosmo and the others. Audrey and Teddy wind up by her side as she dies, while Dosmo and Susan continue to Becky’s house.

Lee goes back to the house, and is going to kill Wes, but Dosmo arrives and intervenes, though is unable to kill Lee due to an empty gun. Lee is killed by Teddy, with the one shot in his gun that he’d intended to kill himself with. Wes survives, and lets Dosmo go (presumably as thanks for saving his life).

Susan and Dosmo run off together, with Lee and Helga’s payment for killing Roy. Susan admits she recognized Dosmo from his job at a pizza place in Studio City, but she wasn’t going to say anything because it might embarass him.

…and Becky gets away scott free in an SUV she stashed a few miles away (though Wes is suspicious of her, and has all the right leads to implicate her). 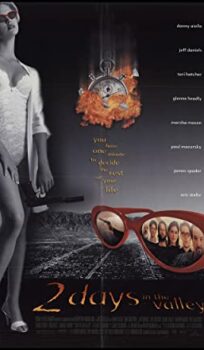