At the dawn of man, a group of apes are on the verge of extinction when a encounter with a monolith causes them to discover tools.

In current day, a prehistoric monolith buried on the Moon is discovered and uncovered. Once exposed to sunlight, the monolith sends a signal to Jupiter.

Discovery One, clouded in secrecy, is sent to investigate.

Enroute to Jupiter, the Artificial Intelligence of Discovery One, HAL, has what can only be described as a psychotic episode. HAL kills off the crew except for the commander, David Bowman. Bowman survives and while disconnecting HAL learns the true nature of the mission.

After reaching Jupiter orbit, Bowman discovers another monolith and enters a portal to another dimension. Ultimately, he is transformed into a “Star Child” (perhaps a god like being) and we last see him looking down on earth while Also Sprach Zarathustra plays. 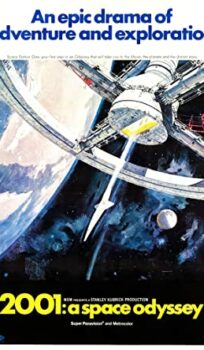