Pooper:
After escaping the festival, Anderson and Joey return with the police to the festival-grounds only to find that it is a confederate graveyard. All of the townsfolk had been massacred by a group of renegade Union soldiers during the Civil War. As Anderson and Joey leave the town on their motorcycle, they are both decapitated by a strand of barbed wire that Hucklebilly strung across the road. The film ends with the ghostly Hucklebilly carrying their heads to his graveyard home.

Long Ending:
In this remake of 2000 Maniacs, several groups of northerners who are heading to Daytona Beach for spring break follow a detour that leads them into the southern town of Happy Valley, whose residents are hosting a reenactment of their civil-war history. The groups include three college friends – Harper, Anderson (Jay Gillespie) and Cory; another group of friends – Kat, Ricky and Joey (Marla Malcolm); and a biker couple named Malcolm and Leah. All groups are enticed to stay the night by the seductive women, handsome men, and promise of delicious food.

The town is led by the one-eyed Mayor Buckman (Robert Englund) and his right-hand woman Granny Boone (Lin Shaye). Kat is the first separated from the group and is killed. Though the others don’t know it, Kat is skinned and served for dinner. Several of the townspeople hook up with the guests (and in Harper’s case, the sex proves fatal). Joey and Anderson hook up out of genuine affection for one another. Although the groups are initially worried about Harper and Kat’s disappearance, the townsfolk assure them that the two are simply hooking up with each other in their hotel room.

When the next day comes and both Ricky and Leah “disappear,” the group becomes even more suspicious. Mayor Buckman and Granny Boone become more aggressive , insisting they not leave before the night’s big BBQ. The remaining guests decide to split up in order to find their missing compatriots and their vehicles. While searching the town, Joey finds a closet full of remains of past guests, dating all the way back  to the 1800s. Cory and Malcolm are killed, while Anderson and Joey are knocked out.

That night, Anderson and Joey awake at the big town BBQ, where their former friends are being served as the main course. Anderson, who grew up in the south, is given an opportunity to join the town by killing Joey. Anderson pretends to agree, but instead uses the meat cleaver he is given to free himself and Joey. Mayor Buckman challenges Anderson to a fight and Anderson gets the upper hand, threatening to poke out Mayor Buckman’s remaining eye. In exchange for mercy, Mayor Buckman allows Joey and Anderson to leave town on Malcolm’s motorcycle.

The teens return with the police to Happy Valley, only to find that it is the cite of a cemetary. It turns out that a Union brigade came to the town during the Civil War and raped and murdered all 2001 residents. In the center of the graveyard are monuments for the long-dead Mayor Buckman and Granny Boone. The inscription on Mayor Buckman’s monument says that the town of Happy Valley will never really be at rest until they have killed 2001 northerners, “an eye for an eye.” Clearly the residents return as ghosts every year to exact their revenge.

Anderson and Joey leave the town on their motorcycle, but are suddenly decapitated. It turns out that one of the members of the town, Hucklebilly, had strung a strand of barbed wire across the road. We watch as Hucklebilly grabs the heads and walks back towards the town, before disappearing.

Eli Roth makes a cameo appearance as his character from the film, “Cabin Fever.” 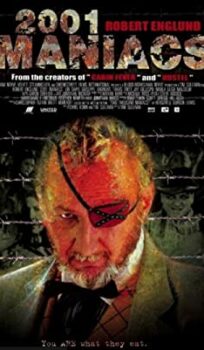