Short version:
Jackson (Taylor Kitsch) and Trujillo (Stephan James) are killed. The majority of the 85 Precinct -including the seven cops killed in the beginning- are in on the drug trade that motivated the entire chase throughout the movie. Andre (Chadwick Boseman) obtains the incriminating evidence from a dying Trujillo and, in the end, delivers an arrested Burns (Sienna Miller), the only surviving cop of the group and who was also in on it.

Long version:
After killing Jackson, Andre catches up with Trujillo, who, in turn, holds Burns at gunpoint and tells him about the thumb drives obtained from fixer Adi (Alexander Siddig), before escaping again. Trujillo makes it to a hotel room, where he uses a computer to reveal the information in the thumb drives: the majority of cops from the 85 Precinct -including the ones Jackson killed at the beginning, when they both tried to move the cocaine from the winery- were part of a drug trafficking ring. When police zeros in again on his location, he runs off, with Andre on pursuit; they eventually wind up in a subway train. Andre convinces Trujillo to trust him and surrender peacefully; but, then, Burns, claiming “she thought Andre would be killed”, shoots Trujillo. Mortally wounded, he gives the thumb drives and the unlocking password to Andre before dying.

In the aftermath, Andre, who was slowly putting the pieces together and was suspicious of all cops around him, figures out Burns called Lieutenant Kelly (Darren Lipari) -the one who led the raid against Adi- before the raid; he then holds a returning McKenna (J.K. Simmons) at gunpoint in his own house, revealing he knows about the drug trafficking. McKenna makes excuses to justify this happening but, when he fails to convince Andre, along with Butchco (Obi Abili), Dugan (Andy Truschinski) and Kelly, engage in a shootout against Andre, who manages to get the upper hand and kills them all. Burns appears last and tries to shoot him from behind, but he convinces her to surrender, in favour of not ruining her daughter’s life due to going to prison for killing a fellow cop. Burns is arrested and Andre drives off, with the thumb drives in his possession. 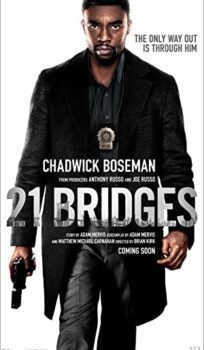