Ben Campell (Jim Sturgess) gets caught by Laurance Fishburne’s character. He roughs Ben up a bit and then lets him go. Ben goes back to his dorm and finds his money is stolen (by Kevin Spacey) and there is a letter on his door that says he flunked out of his class and he won’t graduate.

Ben goes to Kevin Spacey’s character and says they should go back to Las Vegas and set up a big score, but this time Spacey’s character will be one of the big players. They go to vegas and Laurance Fisburne and casino security see them and attempt to stop them. The entire team flees and Kevin Spacey is the only one that gets caught. He find out in flashbacks that Ben Campell made a deal to deliver Kevin Spacey (who counted cards as a kid, and always eluded Laurance Fishburne) to hotel security.

In the end Laurance Fishburne goes back on his deal with Ben Campell and keeps the casino money as a retirement. Ben goes back to MIT, and finally has a story to tell to get the scholarship to get into Harvard Med. His friends end up winning the competition with their remote control vehicle. 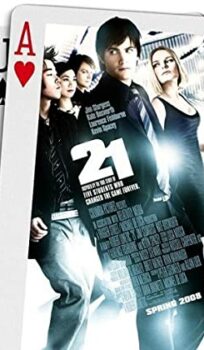