Pooper:
Schmidt and Jenko discover that Mercedes is the drug dealer and go on to save the day during spring break. They then decide to continue working together as cops, partners, and best friends.

Long Ending:
In this meta film, Schmidt (Jonah Hill) and Jenko (Channing Tatum) have moved on to bigger and better things. They infiltrate what they believe to be a drug deal organized by the mysterious villain known as the Ghost (Peter Stromare). They are surprised when they find that Ghost is actually illegally selling wild animals (after an octopus attacks Schmidt and inks in his mouth). After a destructive car chase scene, Ghost and his crew manage to get away. Police chief Hardy (Nick Offerman) is upset at all the destruction caused by the pair and reassigns the two to the Jump Street program (hoping they can duplicate their past success via references to the plot of the first film).

The program is now-located at an even bigger and more tricked out abandoned church at 22 Jump Street, across the street from their old headquarters at 21 Jump Street (alluding to sequel budgets being bigger). They walk past vacant land with a sign stating it is being set aside for the development of 23 Jump Street. Captain Dickson (Ice Cube) assigns the duo to go undercover at the local college. A college girl just died due to the effects of a new drug named WHYPHY. Schmidt and Jenko must determine who the dealer is. They again pose as brothers and move into the dorms.

Hijinks ensue as Jenko befriends star college quarterback Zook (Wyatt Russell) while Schmidt ends up sleeping with an art-student named Maya (Amber Stevens). The pair run out of leads in the case and decide to consult Mr. Walters (Rob Riggle), the dealer they busted in the first film (and whose privates Schmidt shot off). Walters brags about now having female privates and being Eric’s (Dave Franco’s) prison bitch (a claim Eric denies) before pointing out that the dealer in the photo has an arm tattoo. Schmidt and Jenko identify a football player named Rooster (Jimmy Tatro) as their main suspect, knowing that he has an arm tattoo.

Jenko makes it into the frat and grows very close to Zook, who has a personality and intelligence level identical to him. Schmidt hates the frat and eventually decides not to join. The duo grow apart, with Schmidt dismissing Jenko’s meat-headed attitude and Jenko feeling like Schmidt is holding him back from being the best he can be. Jenko soon learns that the tattoo on Rooster’s arm is literally a red herring and that Zook actually has the dealer’s tattoo. Meanwhile, Schmidt learns that Maya is Captain Dickson’s daughter, much to Dickson’s anger. Schmidt also develops an antagonistic relationship with Maya’s roommate Mercedes (Jillian Bell) who calls him out for being too old to be a college student. The pair are also told not to spend any more money as the budget of the “operation” has run over.

Schmidt and Jenko  that Zook was actually a buyer, not the dealer. Schmidt finds Ghost on campus and realizes he is facilitating the sale of WHYPHY. He and Jenko engage Ghost in another high-budget and destructive chase scene and Ghost again evades capture. Schmidt takes the blame for the destruction and tells Jenko to stay in college and pursue his football dreams. Meanwhile, chief Hardy arrests the school’s psychologist for running the WHYPHY ring, saying that the crime was exactly the same as in 21 Jump Street and demoting Schmidt for not following the same script in their investigation.

Jenko soon becomes unhappy with his college life and hanging out with morons like himself. He gets in touch with Schmidt and they both admit that they don’t think the psychologist was the ringleader. They agree to go on one last undercover scheme to Spring Break to track down the true ringleader. While there, they discover that Mercedes is the ringleader and that she was working with Ghost the whole time. A huge shootout ensues and eventually, Schmidt goes after Mercedes while Jenko chases Ghost. Mercedes keeps trying to make out with Schmidt while they fight, but he eventually arrests her with the help of Captain Dickson and Maya. He rejoins with Jenko and tries to take a bullet for him (as Jenko did for Schmidt in the first film), though he mistimes the jump and Jenko is again shot in the arm. The two manage to jump onto Ghost’s helicopter (where Schmidt catches Jenko when he almost falls off) and they blow up the helicopter after jumping into the ocean. They then reaffirm their commitment to each other and to the police force as they walk onto the beach as heroes.

The film ends with Jenko trying to shoot Schmidt in the arm (so they can be even), but missing and accidentally shooting himself. We then watch a series of potential sequels, including Schmidt and Jenko in dance school, vet school, culinary school, medical school, military academy, animated sitcoms, video games, a retirement home and in space. After the credits, we see Walters cuddling with Eric in their prison cell and whispering that he is “late” this month. 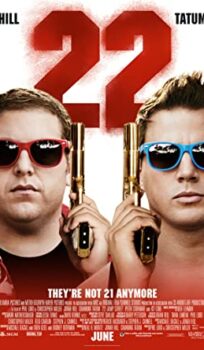