Quick Spoiler:
The two kids and the helicopter pilot survive, the mom, the dad, and everyone else dies. The boy is immune to Rage but is a carrier. They escape over the Channel to France, and the last thing we see is the helicopter torn up and a group of infected sprinting towards the Eiffel Tower.

Long version:
A certain genetic abnormality makes Alice immune to the disease, though she still carries it in her blood and saliva and so can infect people. When the house they are sheltering in with some other survivors gets attacked, Don leaves her to die and feels very guilty about it. He ends up being very important in the restructuring of Britain and the setting up of the NATO secure zone, where they’ve begun bringing civilians back into the country now all the infected have died of starvation.

Don is reunited with his children, Andy and Tam, who were out of the country during the outbreak and tells them their mother died. They are heartbroken and leave the secure zone to return home and find photos and memorabilia of the mother. They discover the mother has been surviving and hiding in the house all through the outbreak and they are all taken back to the secure zone.

While the mother is in quarantine, the guilt-ridden father pays her a visit and, just as the medical officer who discovered the immunity, Scarlett, is given orders to kill her even though she could be the secret to the vaccine, Don kisses Alice and turns infected. He kills her by gouging her eyes out and starts rampaging through the base slaughtering and infecting guards. The military try to quaratine the civilians for their safety in an underground basement but the infected get in and start a mass outbreak. The civilians flee the infected out into the streets of the secure zone where they are gunned downindiscriminantly by the military in an attempt to contain the infection. A military sniper decides not to shoot Andy as he runs and ends up with Andy , Scarlett, and Tam in a building with a small group of other survivors.

The group manage to avoid the Infected, the military, and a full fire-bombing of the secure zone to make it out, with a load of Infected, into the streets of London. The group die one by one until only the two children and Scarlett and Doyle the good soldier are left. Doyle dies giving the car the others are in a push start to get them away from the team of soldiers gassing and flame throwing anything that moves, and Scarlett is killed in the pitch black tube station by the infected Don, who bashes her skull in with a sniper rifle.

Andy and Tam are lost in the tube station and Andy is attacked and bitten by his infected father. Tam shoots him and sees in Andy ‘s eyes that he’s carrying the virus, even though he isn’t turning (so he has the natural immunity his mother did). The two kids meet with the helicopter pilot on Wembley Stadium football pitch and escape over the Channel.

We don’t know what happens in the interim but the movie ends with shots of infected running through Paris. 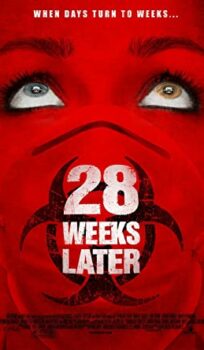