SHORT VERSION:
After Amanda ruins Medusa’s ransom exchange with the amusement park’s owner Mr. Jacobsen, Medusa kidnaps her and later brings her into the bowels of the park, where she eventually handcuffs her to a pipe and plants a bomb next to her that will blow up the park. She then escapes through a sewer line with her crew back to her ship with whatever money she was able to obtain.

Rocky, Colt, and Tum Tum find and free Amanda, then duct tape the bomb to a trio of scuba tanks and aim it down the sewer line right at Medusa’s ship, but are unable to break the valves on the tanks to get it moving. Dave Dragon – who was earlier knocked out by Medusa while helping the boys fight her henchmen – then appears and breaks the valves with a pipe wrench, sending the bomb right at its target and destroying it. Though Medusa and her crew avoid getting killed in the blast, Medusa finds policemen waiting for her when she reaches the shore.

Dave and the boys are hailed as heroes, and the TV station that broadcasts Dave’s show decides to keep it on the air instead of cancelling it. The boys offer Amanda an opportunity to join them for a summer at their grandfather’s ninja camp, and she accepts.

LONG VERSION:
As Mr. Jacobsen (Pat Mahoney) is dropping the $10 million ransom down to Medusa (Loni Anderson), Amanda (Chelsey Earlywine) uses her remote-controlled helicopter to slice open the last bag of money, making the money rain down and get snatched up by the park-goers. Medusa notices Amanda nearby with her remote control and quickly realizes that she is the one responsible for this, so she seizes her and then she and her nephews take her away. Rocky (Mathew Botuchis), Colt (Michael J. O’Laskey II), and Tum Tum (J.P. Roeske II) spot this and give chase. They soon cross paths with Dave Dragon (Hulk Hogan), who has already battled and bested a few of Medusa’s goons himself, and he decides to join them in their pursuit.

Medusa and her remaining henchmen head down into the bowels of the park to make their escape through the sewer line and back to their ship with the money they were able to get, and Medusa tells Amanda that she will make her her slave so she can work off the money she has cost her. The brothers and Dave appear, and Dave fights off a few of Medusa’s ninjas before she knocks him unconscious and continues her escape. She soon changes her mind about Amanda and handcuffs her to a steam pipe, then places a bomb next to her that will blow up the park. As the brothers battle the enemy ninjas, Medusa returns, and after realizing that the boys are superior to her warriors, she shoots out all the lights and plunges the area into darkness, allowing her ninjas to use their night vision goggles and get the advantage. The brothers initially have much trouble fighting in the dark, but they soon remember Mori’s (Victor Wong) words about using their other senses in combat, so they make use of them and defeat their foes.

The brothers find Amanda and attempt to deactivate the bomb with her gadgets, but are unsuccessful. Rocky then decides to duct tape the bomb to a trio of scuba tanks he finds and launch it like a torpedo down the sewer line into the sea and right into Medusa’s ship. After assembling it, the brothers try to break the valves off with a hammer, but they have insufficient strength. Luckily, Dave then appears and whacks off the valves with a pipe wrench, sending the bomb towards the ship, and Medusa and her gang spot it and jump into the ocean before it collides with the ship and destroys it. Medusa swims back to shore, but she finds a bunch of policemen waiting for her there.

Back at the park that night, the boys are interviewed and photographed by the media for their efforts in thwarting Medusa, but the boys tell them that the thanks should really go to Dave Dragon. As the media goes over to Dave to interview him, he and the boys salute each other, and a reporter reveals that the TV network that broadcasts Dave’s show has decided, in light of the day’s events, to not cancel it and extend his contract. The brothers tell their parents and Mori that they need another summer at ninja camp, and they extend an invitation to Amanda to join them, which she accepts. Tum Tum is then given his birthday cake to end the movie. 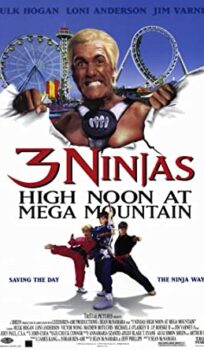