The movie begins soon after Stella (Kiele Sanchez) survived the siege on Barrow and watched her husband Eban burned to a crisp after he had turned into a vampire to save the town in the first film. She has devoted her life to trying to expose the truth of what happened in Barrow, but all of her attempts are covered up by FBI Agent Norris (Troy Ruptash), a human who works for Vampire Queen Lilith (Mia Kershner – she eventually turns Agent Norris into a vampire as well).

Stella is recruited by Dane, a vampire who has managed to retain his human emotions, to join his group of human vampire-hunters consisting of three other people who have survived vampire attacks – Paul (Rhys Coiro), Todd, and Amber. They break into various vampire lairs trying to find and destroy Lilith. In the meantime, Stella and Paul start a romantic relationship. They eventually, stowaway on a ship that is taking Lilith and her vampire minions back to Alaska to attack another town.  While onboard, the group discovers that only beheading can permanently kill vampires, and even if they have been burned by the sun, they can be brought back to life with human blood dripped onto their carcass. The hunters are discovered, and eventually all but Stella are killed. After a battle, she manages to kill Lilith and the other vampires surrender to her. Instead of blowing up the ship, Stella continues to sail it to Alaska. When she arrives, she digs up the burned body of Eban, slits her wrists, and pours her blood onto the dead carcass. Eban is brought back to life as a vampire, and they embrace, with Stella happy that she will not have to be alone any more. Just before the credits role, we see Eban open his mouth and sink his fangs into Stella’s neck.

Order of Main Character Deaths – Todd (turned into a vampire during a raid, has his head bashed in by a cement block by Stella); Dane (Shot through the head by Agent Norris); Amber (caught by vampires on the ship and shot through the head by Paul while three vampires simultaneously drink her blood); Agent Norris (Stella sticks a meat hook through his eye and then beheads him); Paul (his throat is ripped out by Lilith, in front of Stella); Lilith (Stella, who was hiding in a vat of blood, leaps out and beheads her with a machete); Stella (seemingly killed by her revived vampire husband). 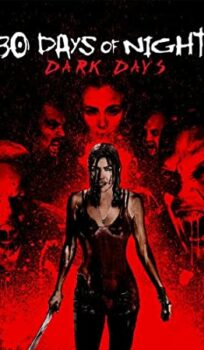