A group of vampires, led by Marlow (Danny Huston), attack Barrow, Alaska during its yearly “thirty days of night”, when the sun does not rise during the winter. The bloodsuckers, after sabotaging transportation, power, and communications, quickly turn the city into one huge, isolated, feeding ground.

After surviving many traps, chases, fights, and fellow townspeople transforming into vampires themselves, as well as the elements, Sheriff Eban (Josh Hartnett), does exactly what he does in the graphic novel – he injects himself with vampire blood, so he can have the power and abilities needed to fight and kill Marlow. He does so while his estranged wife Stella and the remaining survivors can escape Barrow, on the 29th night of the siege.

After seeing their leader killed the other vampires withdraw, and Eban, rather than joining their ranks, decides to let the sun vaporize him the following morning. Eban’s last moments are spent with Stella the next day as they both embrace and watch the sun rise… 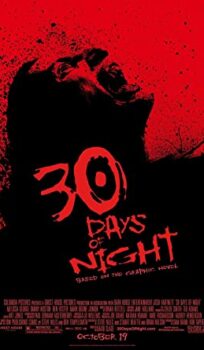