Pooper:
Themistokles manages to unite all of Greece in a successful attack on Xerxes’ fleet, killing Artemisia in battle.

Long Ending:
The film begins with Xerxes (Rodrigo Santoro) decapitating the corpse of King Leonidas after winning the Battle at Thermopylae (as depicted in 300). We then go back in time to witness the first invasion of Greece, led by Xerxes’ father Darius. At the Battle of Marathon, the Greeks defeat Darius’ forces and the general Themistokles (Sullivan Stapleton) wounds Darius with an arrow. Although Themistokles has an opportunity to also kill Xerxes during battle, he shows mercy instead. The Persians return to their home where Darius dies from his wounds. His most-trusted general, Artemisia (Eva Green), convinces Xerxes to transform himself into a god.  Xerxes wanders the desert, eventually coming upon a group of mystics that transform him into a golden-skinned giant. Xerxes returns home to begin raising an army to attack the Greeks once.

Jumping ahead, Themistokles convinces the Athenian Senate to authorize him to command a naval fleet against the Spartans at Artemisium. He travels to Sparta to ask Queen Gorgo (Lena Headey) for the Spartans help (while Leonidas is away consulting the oracle regarding engaging the Persians in battle as seen in 300) and she declines. Themistokles leaves and confers with his trusted friend Scyllias (Callan Mulvey). They note that Artemisia is actually a Greek citizen whose town was ransacked by Greek soldiers. The soldiers killed her family and kept her as a sex-slave, leaving her to die after years of abuse. She was found by a Persian, nursed back to health, and ultimately trained to be a deadly assassin. She has since dedicated her life to killing every Greek she finds.  Scyllias mentions he does not want his son Calisto (Jack O’Connell) to fight, but Calisto joins up with the navy anyways and Themistokles takes him under his wing.

Themistokles’ ships are vastly outnumbers by Artemisia’s navy. Her generals, however, fall prey easily to Themistokles’ superior strategy and he gains two early victories. Each time a commander loses a battle, Artemisia sends them to a watery grave for their failures. Artemisia is impressed with Themistokles’ competence and asks him to negotiate a truce with her. She begins seducing him, asking him to serve by her side as they destroy Greece together. The pair engage in forceful sex (each trying to get the best of the other) with Themistokles eventually spurning Artemisia’s offer. The next day, Artemisia personally leads the attack and destroys many of the Greek ships, personally blowing up Themistokles’ ship (and believing him dead). Themistokles survives the assault, but he and Calisto sadly witness Scyllias as he succumbs to injuries from the battle. Themistokles then learns that Xerxes has defeated Leonidas and the Spartans at Thermopylae (in 300) and is advancing upon Athens. Themistokles orders a full retreat and the Athenian Senate orders everyone to abandon the city.

Themistokles meets with Xerxes’ messenger Ephialtes (Andrew Tiernan), who betrayed Leonidas and his country in the first film. He informs the Greeks that Xerxes has burned Athens to the ground. Themistokles sends Ephialtes back to Xerxes and challenges him to another naval battle at Salamis. Themistokles then has messengers dispatched to the other city-states throughout Greece to ask them to join his fleet in one last stand and tells them to use Leonidas’ story as a rallying cry. He personally visits Sparta to again ask Gorgo for help, but she rejects him as she mourns the loss of Leonidas and his comrades. Meanwhile, Xerxes is hesitant to meet Themistokles in battle, but against his orders, Artemisia decides to sail to Salamis to destroy Themistokles once and for all.

The ships gather at Salamis with Xerxes observing the battle from a nearby cliff-side. Again,  Artemisia’s forces outnumber the Greeks. During the battle, Artemisia encounters  Themistokles on a ship and the two fight, with Artemisia gaining the upper-hand. Before she can strike a death-blow, however, ships from the other Greek city-states arrive, lead by Gorgo and the Spartans. Themistokles has united all of Greece for the first time and the reinforcements quickly begin decimating the now-outflanked Persian fleet. Themistokles uses the distraction to stab Artemisia. Knowing she has lost the battle, Artemisia impales herself fully on Themistokles’ sword.

Xerxes looks on as his naval fleet is destroyed by the now-united Greeks. He walks down from the cliff and begins mobilizing his still considerable army for another land assault as the credits roll.

All the main characters and events in this movie existed and occurred, though the facts are a bit different. For example, Darius did not die at the battle at Marathon. Most egregious, Artemisia was the only general opposed to attacking the Greeks at Salamis, but Xerxes ignored her advice and ordered the battle to be held. Artemisia fought, but did not die, at Salamis. 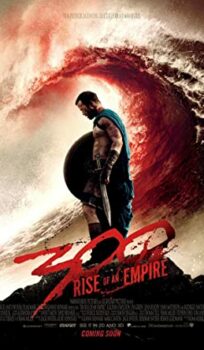