POOPER
Jackie Robinson wins over his teammates, their fans, and even the fans of their opponents as he leads the Dodgers to the 1947 National League pennant.  He wins the Rookie of the Year award that year, and his number 42 was permanently retired by Major League Baseball in honor of him.

LONG VERSION
In the Spring of 1945, Brooklyn Dodgers General Manager Branch Rickey (Harrison Ford) decides it’s time to bring black players into the Major Leagues.  His advisers tell him it’s a bad idea, but he’s going to find the right player and make it work.  That summer, he tracks down Jackie Robinson (Chadwick Boseman), a ballplayer for the Kansas City Monarchs of the Negro Leagues.  Robinson meets with Rickey in Brooklyn, and Rickey tells him that he wants to sign him.  He admires how he won’t back down from a racist, and is a great ballplayer.  However, he will face severe adversity and must control his legendary temper if he wants to stay in the pros.  “Do you have the guts NOT to fight back”, he is asked by Rickey.  When he says yes, Rickey gives him a minor league contract to play with their farm team in Montreal.  Afterwards, Jackie calls his girlfriend Rachel (Nicole Beharie) and proposes marriage to her, and she says yes.

The next spring, Jackie reports to the Montreal team.  His teammates and manager are reluctant to include him in team activities, but Rickey tells the manager to include him or he will be fired.  Jackie makes the team, and quickly makes a name for himself there by hitting a home run in his first at-bat.  Jackie is soon accepted by his teammates, and he leads them to a winning season.  During the off-season, Rachel gives birth to their son.  The following spring, Jackie is about to make the Dodgers team, but some of his future teammates sign a petition refusing to play with him.  Their manager Leo Durocher (Christopher Meloni) calls a team meeting and tells them that they need to get used to the idea of playing with a black teammate and in front of more and more black fans.  If they can’t, Mr. Rickey will have no problem replacing them with someone who can.

The season begins, and the verbal assault against Jackie is immense, from not only the fans of the Dodgers opponents, but from their own fans as well.  That and the pressure of playing for the Dodgers causes Jackie to start the season in a huge slump.  It nearly comes to a head when the Phillies manager’s extensive use of racial slurs causes Jackie to nearly meltdown in the dugout during a game.  A quick pep talk by Rickey, where he tells him the only way to shut these people up is to start hitting and winning games, snaps Jackie out of it, and he leads the Dodgers to a win.  That also snaps Jackie out of his slump, and he begins to lead the Dodgers to the top of the National League.

As the season progresses, the Dodgers’ fans attitude towards Jackie improves, as does that of his teammates.  The few who still resent him are traded away.  But their opponents and their fans are still hostile towards Jackie, and that is shown by Jackie getting constantly beaned by pitches and spiked on the bases.  His teammates support him by fighting back when he is attacked, but through it all, Jackie keeps his temper.  Soon, even the fans of the opponents begin to treat Jackie better.  At the end of the season, Jackie hits a game-winning home run off of the Pirates pitcher who had beaned him earlier in the season.  As Jackie rounds the bases, the Pirates fans get up and cheer him.

That victory clinched the 1947 National League pennant for the Dodgers, and Jackie would be given the Rookie of the Year award.  Several on-screen postscripts tell that Jackie Robinson and several of his teammates are now in the Baseball Hall of Fame.  Today, Jackie’s number 42 is permanently retired by Major League Baseball, and on the anniversary date of his first game, every ballplayer wears #42. 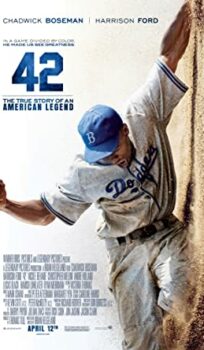