SHORT VERSION:
In the end, Jack and Reggie track down Ganz and Billy (as well as the bag containing the $500,000 that Reggie originally hid before he got put in prison) to the apartment of Billy’s old girlfriend Casey in Chinatown. They go in with guns ready, and Reggie finds Billy first and orders him to surrender. When Billy responds by taking out his knife and advancing toward him, Reggie shoots and kills him. Ganz then appears and spots Jack, and they trade shots with each other until Ganz takes the money and escapes out a window and heads down into the back alleys, and Jack and Reggie both chase after him down different paths. Ganz eventually manages to get the drop on Reggie and hold him, hostage, then calls out to Jack so he can have a chance to get rid of them both at the same time. Jack soon appears, and – as a bluff – Reggie tells him just to go ahead and blow Ganz’s brains out. Jack suddenly shoots Ganz in the chest, and once it registers to Ganz what just happened to him, he flies into a rage and charges at Jack. Jack proceeds to finish him off by emptying his gun into him.

Jack then takes Reggie to the apartment of Candy, a girl he connected with at a dance club earlier in the night, and they have sex while Jack waits outside in Reggie’s Porsche. Once they are done, they agree to meet back up and go on a date when he gets out of prison in six months. Reggie returns to Jack, and Jack shows him that he has the bag with his money in it, and after putting it in the trunk, he assures Reggie that it will be waiting for him when he finishes his sentence. He then drives Reggie back to the prison.

LONG VERSION:
On the first night of Reggie’s (Eddie Murphy) 48-hour release from prison, Reggie confesses to Jack (Nick Nolte) that the issue between him and Ganz (James Remar) is about money: He, Ganz, Billy (Sonny Landham), Luther (David Patrick Kelly), and the now-deceased Wong (John Hauk) stole $500,000 from a drug dealer three years ago, but rather than split the money, Ganz sold Reggie out and got him sent to prison (though Reggie got back at him by ratting him out as well, and he ended up getting imprisoned elsewhere). He also tells Jack that, before he got locked up, he stashed the money in the trunk of his Porsche and parked it in a downtown parking garage, where it has been sitting ever since (he put it there because he knew that Ganz was serving a longer sentence than he was and thus would not be able to get to the money first, and he believed that Luther wouldn’t try to take it because he lacks the courage to cross him), so all they have to do is wait for Ganz to show up there and get the money. Jack parks his car in a spot close to the garage to stake out the entrance, and in the morning, Jack and Reggie spot Luther walking into the garage (having come to get the money because Ganz and Billy earlier kidnapped his girlfriend Rosalie [Kerry Sherman] and told him that they will only give her back to him if he gives them the cash), where he claims the Porsche and drives off in it.

Jack and Reggie tail him until he parks near a subway entrance, and after he takes the bag containing the money out of the trunk and heads down into the subway terminal, they follow him on foot until he stops at a bridge over the train tracks to wait for Ganz and Billy to show up with Rosalie. Ganz appears and makes his way towards Luther, but then Luther looks and spots Jack and Reggie nearby, and Ganz takes notice of where Luther is looking and sees the duo as well. Jack and Ganz ready their guns, but soon after, a random police officer appears nearby and orders Ganz to put his weapon down. Billy then appears with Rosalie and shoots the cop, causing widespread panic, and Luther runs off with the money while Billy grabs Ganz before he can shoot at Jack and flees with him and Rosalie down towards the train tracks. Reggie goes after Luther while Jack goes after the others, and Ganz and company get on a train and hide in the last car. Just as Jack spots Ganz and Billy from outside the train and takes aim at them, a few other policemen appear and order Jack to freeze, allowing the antagonists to get away.

Reggie heads to the nightclub Vroman’s and places a call on a payphone outside to an unknown guy, instructing him to meet him at Vroman’s and to bring a handgun. Jack is seen sitting at his desk and sulking over having lost Ganz and Billy a second time when Inspector Kehoe (Brion James) informs him that Reggie tried to call him earlier on and left the number for the indoor payphone at Vroman’s with him. Jack calls the number, and Reggie answers and tells him where he is, so he heads on over there. After Jack finds Reggie and pulls him away from Candy (Olivia Brown), a girl that he connected with on the dance floor and wants to have sex with, Reggie explains that he tailed Luther to the hotel across the street and saw him make a phone call (implied to have been to Ganz to arrange a new time and place to exchange the money for Rosalie), and he has a new plan for catching Ganz through following Luther. He also shows Jack that he now has a handgun, but Jack decides to let him keep it. Jack then apologizes to Reggie for the many racial slurs he has used against him to try to keep him down because of his status as a convict, and Reggie asks him to give him some money for a room at the aforementioned hotel so he can get intimate with Candy there. Jack gives him some cash, and he finds Candy and takes her outside, but moments later, he spots Luther leaving with the money. He heads back in with her and tells Jack that he saw Luther, and they head off in the direction he went in.

Luther gets on a city bus that has been hijacked by Billy and Ganz, and he sees Ganz holding Rosalie at gunpoint in the back. Unfortunately, after he puts the money down in front of Ganz, Ganz shoots and kills both him and Rosalie. Jack and Reggie pull up alongside the bus in Jack’s car, and Ganz notices this and breaks one of the windows and starts shooting at them. Jack and Reggie return fire, but Billy uses the bus to push the car off the road and into an automobile showroom, enabling him and Ganz to escape once again. Feeling defeated, Jack returns to the precinct with Reggie, and a furious Capt. Haden (Frank McRae) screams at Jack that there are now five deaths related to Ganz and he has blown this investigation on Reggie, then screams that he is suspended and will be subjected to the review board. Jack comes to Reggie’s defense, telling Haden that Reggie has more brains than he will ever know and more guts than any partner he has ever had, and then he takes Reggie out of the building to deliver him back to the prison. When they get to the parking lot, Reggie finds his Porsche in one of the parking spaces, and Jack informs him that he earlier had it impounded and then brought it here. Reggie tells Jack that he isn’t happy that Ganz now has all of his money and he is about to be taken back to jail in his own car, plus he feels like he let him down. Jack assures him that he didn’t let him down, saying that at least they tried, even if what they attempted was a longshot.

Jack and Reggie go to a bar so Jack can buy Reggie a drink before taking him back to the slammer, and while they are there, Jack calls Kehoe at the precinct and finds out that there are no leads on Ganz’s or Billy’s whereabouts, and their bus was found abandoned in Chinatown. After he tells Reggie about this, Reggie soon comes to think that Billy went back there to see his old girlfriend Casey (Margot Rose) that they had questioned the night before, despite her telling them that she couldn’t care less about Billy. They stake out Casey’s apartment building and wait for her to appear, and when they see her returning from doing some grocery shopping, they follow her inside and seize her in the stairwell. They get her to admit that Ganz and Billy are hiding out here and then force her to give away their exact locations. They first enter the room where Billy is, and Reggie finds him first and orders him to surrender, but Billy pulls out his knife and laughs. When he starts moving towards Reggie, Reggie kills him with two shots. Ganz then appears and spots Jack, and they trade shots with each other until Ganz takes the money and escapes out a window and heads down into the back alleys, and Jack and Reggie both chase after him down different paths. Ganz eventually manages to get the drop on Reggie and hold him hostage, then calls out to Jack so he can have a chance to get rid of them both at the same time. Jack soon appears, and – as a bluff – Reggie tells him to just go ahead and blow Ganz’s brains out. Jack suddenly shoots Ganz in the chest, and once it registers to Ganz what just happened to him, he flies into a rage and charges at Jack. Jack proceeds to finish him off by emptying his gun into him.

Later on, Reggie visits Candy at her apartment, having reconnected with her, and they have sex while Jack waits outside in the Porsche. Once they are finished, they agree to meet back up and go on a date when he gets out in six months. Reggie then returns to Jack, and Jack shows him that he has the bag with the money in it, and after putting it back in the trunk, he assures Reggie that the money will be waiting for him when he finishes his sentence (although he does ask Reggie to give him a few thousand dollars towards a new car). After they get in the car, Jack warns Reggie that, if he causes any trouble when he gets out, he will bust him without a second thought. Reggie then sneakily pockets Jack’s lighter after lighting his cigarette for him and promising that he will be an honest man from here on out, but Jack asks for his lighter back, having noticed that he took it. Reggie returns it to him and has a laugh about it before they drive on back to the prison. 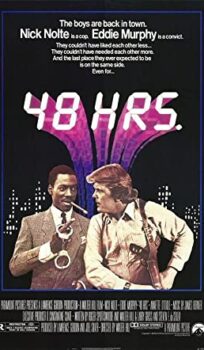