Although criticized as a propaganda film to gain support for the US to enter WWII, this film did win the Oscar for best original story.

At the start of WWII, a German U-boat is sinking ships near Canada.  While six men are off in a small boat, the U-boat is sunk by Allied aircraft.  The USA is still neutral, and the six men flee across Canada hoping to reach safety in the USA.

They reach a cabin with French-Canadian fur trappers.  They shoot one trapper (Sir Laurence Olivier), and some Eskimo traders.  They escape in a seaplane. One german was shot by the Eskimos, and one dies in the seaplane crash.  They reach a farming colony of Hutterites, from Germany.  They think the Hutterites will be sympathetic.  However, the Hutterites left oppression in Germany and love Canada. Vogel regrets joining the german navy, and wants to stay living with the Hutterites.  The officer shoots him for being a deserter.

The three remaining germans make their way across Canada, killing and stealing to get what they need.  One is arrested.   The last two flee into the woods, where they meet Philip Scott. Scott is camping there, painting and writing.  Scott invites them to his camp and gives them food.  They take him by surprise, and tie him up.  They mock him as a coward, burn his writing and paintings, and escape with his guns.  Scott gets free.  The unarmed Scott pursues, overtakes, and captures Kranz.

The commanding officer, Hirth, is the only one left. He jumps a ride on a freight train.  On the train, he meets Brock, an AWOL Canadian soldier.  Hirth and Brock debate the merits of naziism and democracy.  The train has crossed into the USA, and Hirth thinks he is safe.  Brock wants him arrested and sent to Canada to be tried for murder.  Hirth demands that he be taken to the German consulate, as per international law.  The customs agents sympathize with Brock but have no legal basis to send him back to Canada.  Brock points out that they can not allow any cargo in the freight train that is not listed on the manifest.  Hirth and Brock are not on the manifest, so that train car is sent back to Canada. 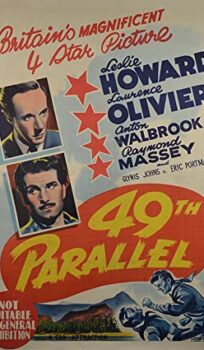