The movie opens with 7 men playing cards in an old west saloon.  One guy, a stranger in town, is caught cheating.  Led by Nick Evers (Roddy McDowell), 5 of the others ride him out of town and hang him.  The last card player, Van Morgan (Dean Martin), tries to stop them but is knocked out cold.

A while later, someone is killing off the card players one by one.  Since no one else witnessed the hanging, Van thinks it is one of the other players eliminating witnesses.  Nick is sure it is a relative of the dead man back for revenge.  However, there are many strangers in town with the gold rush, so it is hard to know who.  Nick is the brother of Nora, Van’s girlfriend.  Nick is a mean angry SOB who hates everybody, including his sister and father.  Nick does not want Van with his sister. Whoever marries Nora will inherit half the ranch.  Nick wants her to marry someone he can run off or push around.

The preacher, Jonathan Rudd (Robert Mitchum) turns out to be the brother of the man hanged at the beginning.  Nick had been telling him the names of the card players to get them killed.  He mainly wanted Rudd to kill Van.  Nick originally lied to Rudd, claiming that he was the one knocked out trying to save the brother.  Rudd sees through Nick’s lies and kills Nick, when Nick has given him the last name.  Rudd goes to kill Van.

In addition to the other card players, Nick gave the name of Van’s best friend George.  Although George dies, the dying George left a clue for Van.  Van confronts Rudd who admits he is getting revenge for his brother’s death.  They have a shootout, and Van kills Rudd.  Van leaves town, leaving Nora behind. 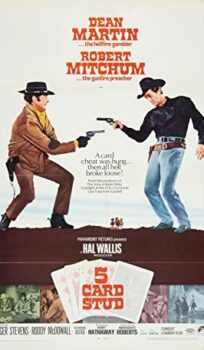