Tom (Joseph Gordon-Levitt) quits his job at the greeting card company and spends some time depressed about his break-up with Summer (Zooey Deschanel). Things get worse after Tom finds out that Summer is getting married, but he eventually begins to clean up his act and go on interviews at architecture firms to fulfill his dream.

He runs into Summer when she comes to see him at the park he had always loved. He is angry at first and tells Summer that she was right — there is no destiny, no such thing as a soul mate, and that love is a meaningless word — and is surprised when Summer laughs at him. She says that it turns out that he was right to believe in all of that stuff after all, because she found it when she met her husband. It exists, it’s just that they weren’t right for each other. They part, and Tom tells Summer that he is honestly happy for her.

On day 500, Tom goes for an interview at a firm and meets a girl who is interviewing for the same job. She recognizes him from the park, which she also loves. Convinced that there is no such thing as a coincidence, Tom ignores it. But he changes his mind as he is heading in for his interview and asks her to go get coffee with him after they are done. She agrees, and tells him that her name is Autumn.

The calendar that has been used throughout the movie resets itself to one, and the movie ends. 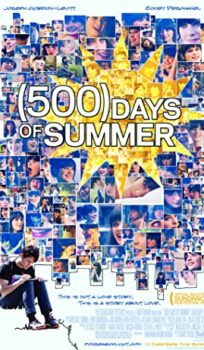