When Shane (Ryan Phillippe) works a shift at Studio 54 on New Year’s Eve 1979, he finds out that Julie (Neve Campbell), whom he saw as a potential girlfriend, was now seeing Roland (Robert Bauer), since she wanted to sleep with him to advance her acting career. Disgusted and hurt, he blows her off. Then, shortly after the New Year is rung in, elderly regular Disco Dottie (Ellen Albertini Dow) overdoses on drugs on the dance floor and dies, and Steve’s (Mike Myers) apathy towards her prompts Shane to quit on the spot. The IRS and FBI then arrive and arrest Steve for tax evasion. As Shane is heading home, he meets up with Julie again, who had decided to ditch Roland after a change of heart. The two patch up their differences and decide to be just friends.

Things change over the next couple of years: Julie moved out to Hollywood to further her career and got a small part in a good film. Greg (Breckin Meyer) and Anita (Salma Hayek) are still together, and Anita released an album, but it was criticized by some as being “too disco.” Greg also stopped dealing drugs and got a good job in construction. Shane started taking business classes at NYU during the day while working as a restaurant manager at night, and also started seeing his dad and sisters at least once a week. Steve spent a year and a half in jail, and he eventually sold Studio 54 to big corporations, but remained on as a consultant. Steve would host a “welcome back” party at the club sometime after, and he, Shane, Greg, and Anita reunite. 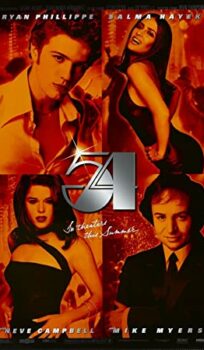