POOPER
A hip infection ends Mickey Mantle’s season with 54 home runs. Roger Maris hits his record-breaking 61st home run on the final day of the season. MLB Commissioner Ford Frick announces that since Maris needed more than 154 games to break the record, the new mark will include an asterisk to show that it was set after the season was expanded to 162 games. That asterisk would stay in the record book until 1991, and Maris’ record would stand until Mark McGwire broke it in 1998.

LONG VERSION
In 1961, the New York Yankees are coming off yet another pennant-winning season, highlighted by the MVP performance of outfielder Roger Maris (Barry Pepper). However, the most popular player on the team is fellow outfielder Mickey Mantle (Thomas Jane), who finished second in the MVP vote. With the American League expanding to 10 teams that year with the addition of the Los Angeles Angels and the Washington Senators, the season will be extended by 8 games, from 154 games to 162. Combining that with the watered-down pitching expected that year due to the expansion, many believe that Babe Ruth’s 34-year-old record of 60 home runs in a single season could be broken. As the season begins, Mantle is off to a hot start but Maris is not. In an attempt to shake things up, Yankees manager Ralph Houk (Bruce McGill) flip-flops them in the batting order. It works, as Maris begins to heat up while Mantle continues to hit. With both players hitting numerous home runs, it becomes apparent that Ruth’s record is indeed in jeopardy, and it’s likely either Mantle or Maris, or possibly both, could break that record.

As the season progresses, it’s quite obvious that the New York fans and sportswriters are all pulling for the more popular Mickey Mantle to break the record. The long-time Yankee is very outgoing and friendly to the media, while Roger Maris, who’s only been with the team for two years, is quiet and seen as aloof. However, Mantle’s off-field behavior is beginning to affect his on-field performance. He enjoys the Manhattan nightlife by constantly drinking and having several affairs, and often shows up to the ballpark hungover. That toll is also affecting his health, as he is constantly playing in pain while recovering from various injuries, including a knee injury from several years ago that never properly healed. To help keep Mantle out of trouble, Maris and his roommate/teammate Bob Cerv invite him to move into their shared house under one condition: no women allowed.

As Mantle and Maris close in on the record, the New York sportswriters begin to concentrate solely on the duo. Mantle continues to be a media darling, but Maris is uncomfortable with the increased scrutiny. They report everything Maris says and does, even making things up along the way, and he is being made out as the bad guy in the home run chase. This spreads to the fans, and they constantly heckle Maris, even going so far as throwing chairs at him on the field. This eventually turns into Maris receiving hate mail and even death threats. The Yankees opponents begin to pitch around him or bring in a pitcher solely to face him, making it harder to hit home runs. Even the Yankees owner wants Houk to switch Mantle and Maris in the lineup again so Mickey has the better chance at breaking the record. All of this stress affects Maris so much that he’s breaking out in hives and his hair starts falling out in clumps. His only relief comes in by way of his calls to his wife Pat, who lives with their kids in Kansas City, where Maris used to play before becoming a Yankee. Another form of relief comes when manager Ralph Houk refuses the owner’s demand to change the batting order, saying the current lineup gives the team the best chance at winning.

As the season nears the end, MLB Commissioner Ford Frick (Donald Moffat), Babe Ruth’s former ghostwriter, announces that if either Mantle or Maris need more than 154 games to break the record, an asterisk will be added to the new mark to show that he needed more games to break the record than Ruth did to set his record. But as the 154th game approaches, Mantle’s health problems finally catch up to him. A botched injection to treat the flu leads to a hip infection that lands him in the hospital, ending his season with 54 home runs. Maris does hit his 59th home run, one short of the record, in game 154, but bad weather and a knuckleball pitcher on the mound prevents him from getting number 60. With Maris now the only one who can still break the record, the fans and some of the sportswriters are finally pulling for him to get it, but many of them, as well as Commissioner Frick, are glad Maris didn’t get the record in 154 games. With the pressure mounting to hit 2 more home runs and the number of games remaining to do so decreasing, Maris begins pressing and only hits one over the next 7 games. Finally, on the last day of the season, Roger Maris hits his 61st home run, setting a new major-league record. In a voiceover by Yankees PA announcer Bob Sheppard, he reveals that the asterisk would stay in the record book until 1991, when MLB Commissioner Fay Vincent ordered its removal. Because Roger Maris died in 1985, he never lived to see the record as his alone.

In 1998, Mark McGwire and Sammy Sosa are pursuing Roger Maris’ record. After McGwire hit number 61 to tie the record, Pat Maris and her now-grown children go to St. Louis to see the record broken. Pat has to go into the hospital and cannot attend the game, but the rest of the family are in the stadium when Mark McGwire hits his 62nd home run to set the new record. After he is congratulated by his teammates and Sosa, McGwire goes to the stands and hugs the family. McGwire would end the season with 70 home runs. The movie ends back in 1956. A young Billy Crystal (the movie’s director) is attending his first Yankees game, and he sees his favorite player, Mickey Mantle, hit a home run. 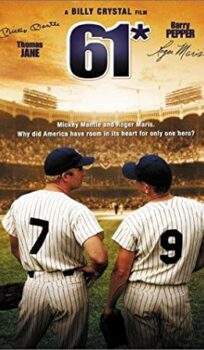