After Meredith (Henry Fonda) collapses in the middle of a hand, having lost all of his family’s money, and is taken off by the doctor, his wife Mary, (Joanne Woodward) takes over. She does not know the rules of poker, and has no money left with which to meet the others’ bets with. She goes to the bank to ask the banker Ballinger (Paul Ford) to loan her money, using her hand of cards as collateral. After he looks at them, he agrees, despite his well-known dislike for poker, saying in front of all the other players, that it’s the best collateral he’s ever been offered. She is able to meet the bets. Since all the other players then fold, she wins all the money, and does not have to show what her cards in reality were. All the players return home then.

Henry Drummond (Jason Robards) whose daughter was supposed to be married, when he went off to the poker game, takes his son-in-law to be, upstairs, and tells him his daughter is basically a pill, they both know it, and she isn’t worth 40,000 acres. He gives the young man some money, tells him to go out the window, take his horse, ride away, and to find himself a good woman..

The next scene is Mary, Meredith, the child who up to this point was said to be their son, the doctor and the banker, in a casino, counting out the money from the card game. The entire thing was a con, Mary and Meredith aren’t husband and wife, she’s really an experienced gambler and she’s really dating the banker, whose her boyfriend, and who financed the whole thing for her. 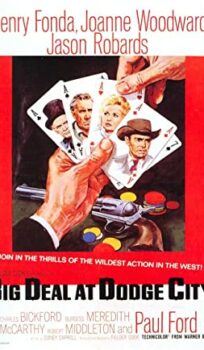