Short version:
The ants realise they always had been much stronger than the grasshoppers and defeat them, so the abuse stops. Atta becomes Queen and gets together with Flik.

Long version:
Flik, together with the circus bugs (who are incorrectly thought by the other ants to be “warriors” instead), makes a plan to defeat the grasshoppers, which involves constructing a big (fake) bird to scare them off.

The circus owner suddenly shows up at the colony to demand the circus bugs come back, so all of the ants find out Flik lied to them about the circus bugs being warriors; they turn their backs on him and Flik leaves.

The grasshoppers flee because the ants together can easily defeat them (they just never realised that; the overarching theme of the film is that they never knew their own worth). Hopper is killed by the bird that was seen earlier in the film and fed to her chicks.

Atta is crowned Queen, and in her turn passes her previous “Crown Princess” crown on to Dot. Flik and Atta kiss and get together (which implies he’ll become king consort).

The circus bugs leave with their circus owner. Heimlich finally has developed wings and is over the moon with this, though they’re tiny and he doesn’t seem to be able to fly with them. 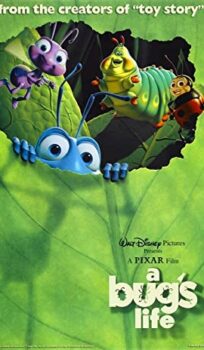