Through visions of the past and present, Ebenezer Scrooge watches himself go from being humble and jolly to cold and arrogant.

When viewing the impending future, he sees that his actions take their toll as he finds out that both he and Tiny Tim have died on Christmas Day. When the Ghost of Christmas Future takes him to the cemetery to show him his grave, Ebenezer swears he will change his ways if he is allowed to live, but the Ghost pushes him into his grave. As Ebenezer lands in the coffin, he wakes up from his dream with a new love for life.

He makes up with all the people he had been cross with before. He joins his nephew for Christmas dinner, and the next day takes special care of his assistant Cratchit, giving him a raise to help feed his family. Cratchit closes the movie with a narration that Scrooge became like a member of his family, and that Tiny Tim eventually got better.

The movie, in all incarnations, ends with Tiny Tim in Scrooge’s arms, wishing, “God bless us, everyone!” 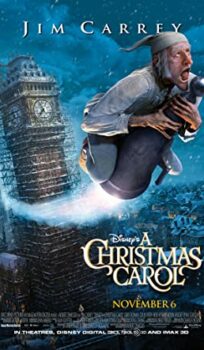