A blacksmith named Hank Martin (Bing Crosby) is having to learn a new trade as an automobile mechanic in turn-of-the-century Connecticut, but he is adept and can make or repair just about anything. After shoeing a horse for a customer, Hank gets thrown from the horse and wakes up in the 6th century, in King Arthur’s England.

Hank quickly impresses the king with things such as matches and a magnifying glass, so he is dubbed “Sir Boss” and allowed to set up a smithy shop. He is befriended by round table knight Sir Clarence Sagramore, and falls in love with Alisande (Rhonda Fleming), the king’s niece. Hank teaches “Sandy” to wink and she falls for him too, but is already betrothed to Lancelot. Jealous of Hank’s abilities and the king’s favor, Merlin and Morgan le Fay plot Sir Boss’s downfall.

Lancelot challenges Hank to a jousting match, where Hank humiliates the knight by lassoing him off his horse. Alisande is mortified that Hank would be so unchivalrous, and comforts Lancelot.

Hank convinces the king to tour the country as a peasant in order to truly understand the poverty his subjects are in; Merlin uses this as an opportunity to have the shabbily disguised Hank, Clarence, and the king captured and sold as slaves. The men escape using Hank’s knowledge of a solar eclipse to mimic magic and Hank rescues the kidnapped Alisande from Merlin’s tower. However, Hank has been injured and as Alisande professes her love for him, he passes out and awakes back home.

Years later, Hank travels to tour the Pendragon Castle and tells his story (all of the earlier part is flashback) to the elderly descendant heir of the castle, who is amused by the story. Lord Pendragon suggests that Hank tour the eastern parapet where his niece is out for a walk. The look-a-like niece is named Sandy, and gives Hank a wink. 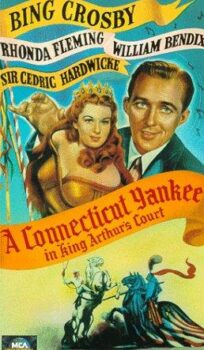