A Cry in the Dark

A dingo did kill Lindy Chamberlain’s (Meryl Streep’s) baby Azaria. The child’s clothing, with traces of dingo saliva, was found after Lindy was convicted of her murder. The conviction was subsequently overturned.

True-life update for July 2004, 24 years after the incident: Frank Cole, a Melbourne man, now claims to have seen a dingo carrying the baby, shot it, and buried the body of Azaria Chamberlain. He says he remained silent during Lindy’s trial for fear of being prosecuted for the crime of firing a gun in a national park (news link). 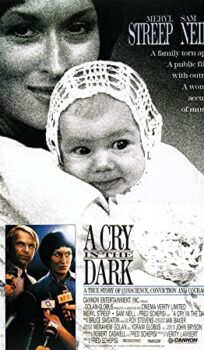