Anthony John (Ronald Colman) is a famous stage actor.  Unlike other actors, he is kind and friendly with the stagehands and ushers, and is liked by them.  However, the critics and theater people think he is wasting his talent on trivial roles in lighthearted comedies.  He is convinced to take the lead role in Othello.  His fiancee is very against it.  In a bit of foreshadowing, his fiancee and his agent discuss how he becomes completely immersed in his roles.  In his personal life, he takes on the persona of the character he is portraying.

The movie assumes the viewer is familiar with the play Othello.  (If you are not, here is Othello in a nutshell.  Othello is the leader of the army of Venice. He is engaged to Desdemona. Iago is an officer who hates Othello and wants to ruin his life.  Othello thinks Iago is his friend.  Iago frames Desdemona for infidelity.  In a jealous fury, Othello strangles Desdemona.  Iago’s treachery is exposed.  In sorrow over what he has done, Othello stabs himself.)

Anthony becomes jealous of his fiancee.  He begins to mutter his lines from the play under his breath. When others speak to him, he often hears lines from the play rather than what they said.  In the play, he gets so carried away strangling the Desdemona actress, that sometimes other actors have to come on stage early to prevent her being injured.  Anthony has a secret affair with Pat (Shelley Winters).  He shows up at her apartment in the middle of the night.  He begins to act like Othello, and when she speaks he instead hears Desdemona from the play.  He strangles her to death.

The police report notes bruises on her lips indicate she was strangled while she was being kissed. To sell papers, a reporter ties this in to the death scene at the end of the blockbuster show Othello.  The theater publicist Bill promotes this to drum up interest in the production.  Anthony is furious and confronts Bill in Bill’s office.  Anthony tries to strangle Bill while repeating Othello’s lines.  Bill is fired because the star, Anthony, demands it.  Bill goes to the police with the knowledge that Anthony is the killer.  The police do not believe him, and think he is just trying to get more free publicity.  Besides, they already looked into that, and Anthony’s fiancee and her maid say Anthony was there all that night.  Bill speaks to the fiancee and learns that the truth is Anthony was gone for several hours in the middle of the night.

Convinced that Anthony is the murderer, Bill sets a trap.  Pat was a waitress at a diner.  Bill hires an actress, dresses her in Pat’s waitress uniform, with makeup and wig to look just like Pat.  He has Bill meet him at another diner, where he has the actress as their waitress. Bill convinced one police detective to come watch.  Anthony’s agitated behavior makes the detective suspicious.  They go back to a witness who failed to identify Anthony.  When shown a picture of Anthony wearing his Othello beard he immediately identifies that as the man who met Pat at the diner.

The police want to arrest Anthony. They go to the theater, but wait to arrest him after the performance.  Anthony sees all the police at the entrances, and knows why they are there.  Anthony uses a real dagger, and in Othello’s death scene he really kills himself. 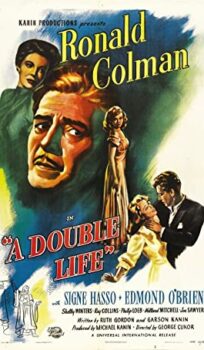