POOPER
John and Jack kill Komarov and Irina and destroy all of the uranium.  They reconcile and return home.

LONG VERSION
John McClane (Bruce Willis) travels to Moscow, Russia to see his estranged son Jack (Jai Courtney), who is on trial there for murder.  Just as John arrives at the courthouse, it is bombed by henchmen hired by Viktor Chagarin, a corrupt Russian official who wants to kill Yuri Komarov, a political prisoner who has incriminating evidence against Chagarin.  Jack had agreed to testify against Komarov, so they were in the courthouse at the same time.  He and Jack escape from the rubble together and is joined by John, whom Jack is not happy to see.  The trio escape Chagarin’s henchmen, led by Alik, and make their way to a CIA safehouse.  John then learns that Jack is a CIA agent, and their appearance together in the courthouse was part of an undercover operation.  The CIA wants the file that contains the evidence that Komarov has, and in return they will get him out of the country.  Komarov agrees, but will not leave unless his daughter Irina can come with.  The henchmen find the safehouse and kill all of the CIA agents, but Jack, John, and Komarov all escape.

The file is hidden in a vault, and the key to the vault is hidden in a local hotel.  The trio arrives at the hotel, where Irina is waiting for them.  While Komarov gets the key, John becomes suspicious of Irina, and is proven right when Alik and the henchmen arrive.  Irina had sold out her father to Chagarin, but John and Jack are able to survive the resulting gunfight and escape from the hotel.  Jack learned earlier that the vault is at Chernobyl, and he and John drive out there in a stolen car full of firearms.  By the time they arrive, Komarov, Irina, Alik, and the rest of the henchmen are already there.  Once there, Alik learns that there is no file, and that Komarov and Irina are working together to steal enriched uranium that is being held there.  Everything up to this point was a ruse in order to get the uranium and kill Chagarin, who was Komarov’s former partner and the one who sent him to prison.  Komarov then kills Alik, and while on the phone with Chagarin, one of Komarov’s associates kills him.

The movie ends with John and Jack returning to New York, where they meet John’s daughter/Jack’s sister Lucy (Mary Elizabeth Winstead), and the trio walk off together as a happy family once again. 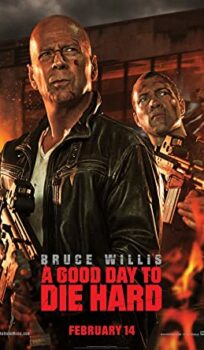