Will Tenneray (Kirk Douglas) is an old gunfighter. When another famous aging gunfighter, Abe Cross (Johnny Cash) shows up in town, everyone is afraid of a shoot out.  However, when Will and Abe meet, they hit it off and become friends. Will sees all the betting on the expected gunfight.  Will proposes to Abe that they have a gunfight for money, selling tickets and getting part of the gambling action.  They have to hold it across the border in Mexico.  In conversations, they reveal that they are going into this, because each is arrogantly sure that he will be the winner.

In the gunfight, Abe kills Will.

There is an extended dream sequence, where Will’s wife imagines what would have happened if Will had won. She realizes that with all the money, Will would have abandoned her and their son.  Abe’s girl Jenny (Karen Black) refuses to leave town with him, because she knows it will just be one gunfight after another until he is dead. Abe rides off alone. 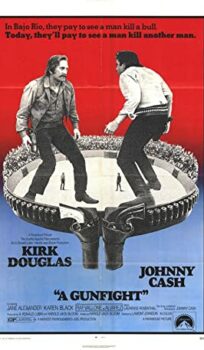