David (Haley Joel Osment) finds a statue of Pinocchio’s Blue Fairy in the submerged Coney Island amusement park. He stays there, wishing and praying to become a real boy. 2000 years later (and after the arrival of a new ice age), a barely-active David is excavated by a team of advanced mechas looking for information about the now-extinct human race (talk about obscure locations to put your off-site backups!). Even with their superior technology, they are unable to make David real, but they are able to create a clone of his “mother” Monica (Frances O’Connor) that will survive for a single day. They spend a perfect day together, at the end of which Monica tells David she loves him. David, having received his true wish (becoming a real boy was only a means to attaining her love) falls asleep and has sweet dreams. 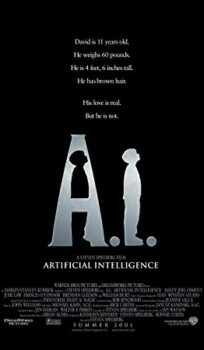