A Letter to Three Wives

A letter from Addie Ross (voice of Celeste Holm) tells Deborah, Rita and Lora Mae (Jeanne Crain, Ann Sothern, and Linda Darnell, respectively) that she has run off with one of their husbands. The trio has to spend an entire day worrying and thinking about which husband it is. Rita arrives home first, to find her husband George (Kirk Douglas) on the couch listening to Brahms. Then Deborah gets home and receives a note from Brad (Jeffrey Lynn) saying that he won’t be home that night. Lora Mae gets home and tells her mother (Connie Gilchrist) that she figures she’s lost Porter (Paul Douglas), but he arrives in the middle of the discussion. At the country club ball that night, Rita and George manage to drag the depressed Deborah along, but she has an awful time. She finally gives up all attempts to be pleasant, and rises to leave. Porter stops her, confessing that it was he who ran off with Addie, but that he changed his mind. Deborah goes home happy, and Porter tells Lora Mae that she now has all of the information she will need to divorce him and take as much money as she needs. Lora Mae claims not to have heard any of the previous discussion, and treats him with the first legitimate affection of their entire relationship. 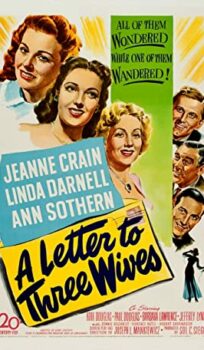