Conor (Lewis MacDougall) is a 12-year-old who is dealing with a recurring nightmare while his mom (Felicity Jones) is being treated for cancer.

One night, a Monster in the form of a giant tree comes to him and promises to tell him three stories.  These fairy tales come in alignment with the changes in Conor’s life – having to move in with his grandma (Sigourney Weaver), being bullied, and watching his mother’s treatments fail.

Eventually, Conor learns the Monster is there to help him accept his mother’s death and he is able to let her die.

In the final scene, he learns that the mother could also see the Monster when she was a child and needed guidance. 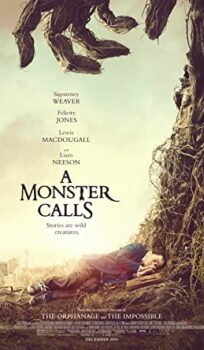