Adela (Judy Davis) accuses Dr. Aziz of attempted sexual assault while the two of them are hiking in some remote caverns. The elderly Mrs. Moore (Peggy Ashcroft – BEST SUPPORTING ACTRESS OSCAR), Adela’s traveling companion, is very fond of Dr. Aziz and knowing he will not get a fair trial, leaves India but dies while en route back to London.

Given that political relations between the English and Indian communities are contemptuous, the trial of Dr. Aziz draws many spectators and protesters.  While on the stand, Adela realizes that Dr. Aziz actually did not assault her and she asks that all charges be dropped.  Most likely Adela was suffering from heat exhaustion and dehydration, and hallucinated the incident.

Adela returns to England, a somewhat broken woman. Dr. Aziz, bitter over the entire experience, leaves his village and practices as a private facility.  Years later, he writes to Adela, forgiving her for her accusation and praising her for her bravery in admitting she was mistaken. 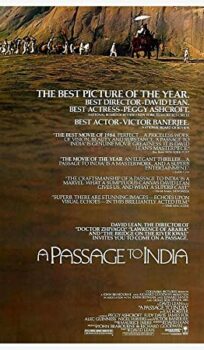