Cliff and Cydney Anderson (Steve Zahn and Milla Jovovich) are newlyweds that are vacationing in Hawaii. While hiking, they come across news reports of a man and a woman who were recently found murdered on one of the other islands. Tension mounts as they encounter several suspicious couples who could be the killers.

Cliff and Cydney are shown to be the real killers. It’s also revealed that “Cliff” is really Rocky, the psychotic high school sweetheart that “Cydney” told Gina about. The pair have been murdering people and assuming the victims’ identities. After planting evidence to frame Kale and Cleo for the murders, they planned on killing Nick and Gina and taking over their identities.

After much fighting between the two couples, Nick is finally able to get Cliff’s gun and point it at him. At that moment, a police helicopter arrives with Cydney on-board. Cliff says if Nick kills him, they will kill Nick and that if he (Cliff) is arrested, he will beat the rap and come looking for Nick. Nick decides to put down the weapon. Cydney then tells the police sniper that Cliff is the murderer and points out that he’s making a move for the gun. The sniper shoots Cliff in the head, killing him.

Nick and Gina are taken on-board the chopper to receive medical attention. As they fly away, Nick pulls out the engagement ring and proposes to Gina. 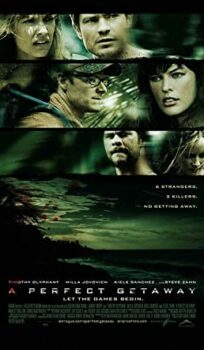