Steven (Michael Douglas) has run into serious financial troubles and decides to have his rich wife, Emily (Gwyneth Paltrow), murdered.  He finds her lover David (Viggo Mortensen), and confronting him about the affair and his criminal past, offers him $10,000 to kill Emily and make it look like a botched robbery.  David agrees but doesn’t have the stomach to do it himself, so he gets a friend to do it.

However, Emily manages to kill her attacker, throwing Steven’s carefully laid plans into chaos.  When David hears Emily is alive, he blackmails Steven with a recording he made of Steven’s pitch.  Steven kills him, but not before David tells him he already sent the recording to Emily.  Steven races home to intercept the recording before an increasingly suspicious Emily can listen to it.  He opens the package before she does and puts it in his safe, but Emily breaks into the safe and hears the recording while he is showering.  She confronts him and he attacks her.  After a brief scuffle she shoots and kills him. 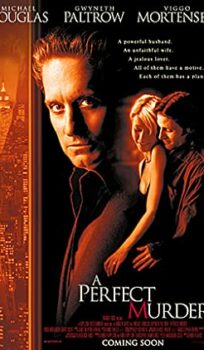