Sy Abelson dies in a car accident. In dealing with his divorce, Larry seeks the aid of Rabbi Marshak, who cannot see him. Larry’s son Danny’s Bar Mitzvah is a success. Danny speaks to Rabbi Marshak, who gives him back his radio (confiscated in the beginning by his teacher) and tells him to “be a good boy.” Back in his office, Larry is hinted that he has received tenure and chooses to up Clive’s grade from an F to a C-, using his bribe money to pay for the divorce lawyer. He receives a call from his doctor asking him to come in immediately to discuss his x-ray results.

In class, Danny is about to pay back Fogel the money he owed that was kept in the radio holder before it was confiscated. Their teacher informs the class that a tornado is approaching and that they will be moving into the basement of the synagogue. Outside, Danny calls out to Fogel, who is transfixed with his friends on the quickly approaching twister. 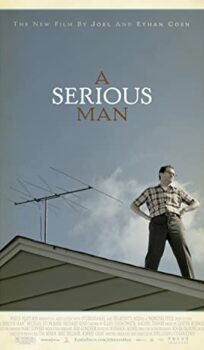