SHORT VERSION:
Queen Gnorga eventually comes to Central Park with King Llort to kill Stanley, and her method of arrival destroys nearly all of the park. They find Gus and Rosie as they are leaving Stanley’s place, and they chase after them and kidnap Rosie and take her to Belvedere Castle. Gus goes back to Stanley to get his help, but he is afraid to battle Gnorga. Gus calls him a coward, throws his toy boat at him, and leaves to save Rosie himself.

Gus’ rescue attempt fails, and Gnorga turns him into a troll. However, Stanley then appears in an enlarged version of the toy boat, and he and Gnorga have a literal thumb war that he wins, and his powers cause flowers to start growing on her body. Stanley and the kids then sail away, but Gnorga takes control of Gus’ thumb and makes him turn Stanley to stone with it. The boat falls in the direction of the kids’ house, and they land safely in their bedroom while the petrified Stanley lands in a trash can. Gnorga turns into a rosebush, and she and Llort are sent back to the Kingdom of Trolls, where Llort becomes sole ruler and looks to head a much kinder regime.

The kids bring Stanley back to the park the next day, and Gus suddenly develops a green thumb and touches Stanley with it. This brings Stanley back to life, and then he uses his powers to restore the park back to its original state.

LONG VERSION:
After finding out that Stanley has survived another attempt on his life, Queen Gnorga decides to go to Central Park to personally eliminate him. She heads there with King Llort along for the ride, and she comes in the form of a tornado that rips through Central Park and ravages virtually everything. Gus and Rosie have just exited Stanley’s dwelling as he is sleeping to return to their home before their parents get back, and Gnorga and Llort spot them and the former decides to start following them after having recognized them from a vision she saw of Stanley in her looking glass. Stanley’s animal friends, who followed Gus and Rosie out, see this and rush back to Stanley to warn him, but can’t stir him from his nap. Gnorga and Llort come right at the kids, and they lead the trolls on a chase, but Gnorga eventually captures Rosie and she and Llort bring her to Belvedere Castle.

Gnorga alerts Stanley to her presence just as Gus shows up to tell him that she has Rosie and needs the help of him and his green thumb, but he is too scared of Gnorga and her magic to face her. Gus calls Stanley a coward, saying that he will never have a dream come true because he is too scared to fight for what he believes in, then throws his toy boat at him and leaves to free Rosie himself.

He enters the castle while Gnorga and Llort are distracted and gets Rosie out of her cage, but Rosie’s noises of happiness blow Gus’ cover. Gnorga and Llort chase them outside and nab them, but as Gus tries to hurt Gnorga, she – believing him to have a troll-like attitude – turns him into a troll. Stanley’s flower and animal friends then start pestering Gnorga and Llort, and Gus frees Rosie from Llort’s grip by using his now-purple thumb to turn his feet to stone, having gained this ability upon his transformation.

Rosie falls off the edge of the castle into a chasm, but Stanley appears on an enlarged version of Gus’ boat and rescues her. Stanley and Gnorga then have a literal thumb war until Stanley’s powers manage to overcome Gnorga’s and causes flowers to start growing on her body. Stanley, Gus, and Rosie then escape on the boat, but Gnorga uses her thumb to take control of Gus’ thumb and makes him touch Stanley and turn him to stone. The boat then conveniently sends itself right at Gus and Rosie’s house, where they fall through their bedroom window and the petrified Stanley falls into a garbage can. Stanley’s magic then takes full effect on Gnorga and turns her into a rosebush, and she and Llort are sent back to the Kingdom of Trolls. With Gnorga gone, Gus turns back into a human, and he and Rosie get into bed before their parents come in to check on them.

The next day, Gus and Rosie go back to Central Park with their parents and bring along the stone Stanley, and they place him on a rock there. Gus then suddenly develops a green thumb like Stanley’s, so he touches Stanley with it in the hopes of breaking the spell on him, but nothing seems to happen. They walk away, but as they turn back to take one last look at Stanley, they see that he is gone. They then look up in a tree and see that Stanley is back to normal, and he begins to use his powers to restore Central Park to its former beauty just as Gus and Rosie rejoin their parents (who, for some reason, take no notice of Stanley) and wave goodbye to him.

Back in the Kingdom of Trolls, the populace has rejoiced over Gnorga’s defeat, and Llort becomes sole ruler and looks to reign as a much kinder king. Stanley has also been exonerated of all charges in the kingdom. 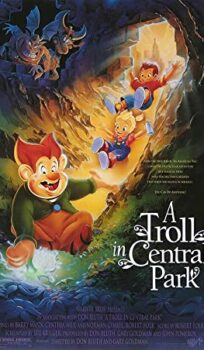