Author Bill Bryson (Robert Redford) decides to hike the entire Appalachian Trail and invites the only other person who is willing to go with him – his old friend Katz (Nick Nolte) – whom he fell out of touch with years ago.

The two set off from the start of the trail in Georgia and have several misadventures including inclement weather, the ire of a jealous husband and an encounter with a couple of hungry bears.  Half way through the hike, the two fall off the path and down onto an outcropping of a cliff. They cannot successful climb back to safety and have to spend the night in the element but are rescued in the morning by some passing hikers.

Although Bill wanted to do the entire trail, he realizes that what he really wants is to go home, and that is what he and Katz do.

Bill returns to his home on New Hampshire and Katz to Iowa.  While Bill is going through the mail he accumulated during the weeks he was gone, he finds that Katz had been sending him postcards along the way of their adventures and the last postcard reads “What’s next?”.  Bill decides to start writing a book called A Walk In the Woods, detailing their journey. 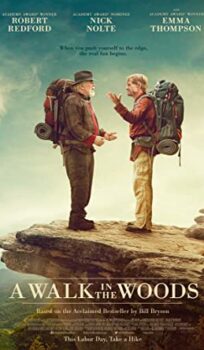