Debbie Jellinsky (Joan Cusack) is a “black widow”, who marries rich men and then kill them to keep their fortunes.  She enchants Uncle Fester (Christopher Lloyd) into marrying her, and then manipulates him into breaking up with his family.  This upsets both Gomez (Raul Julia) and newborn Pubert, who turns cutesy, pink-cheeked, and with golden curls.

Meanwhile, at camp Chippewa, Wednesday (Christina Ricci) and Pugsley (Jimmy Workman) decide to take part in the Thanksgiving Pageant, only to wreck it, in order to get back at everyone for permanently picking on them.  Then, they escape, and fellow camper Joel (David Krumholtz) kiss and bids Wednesday goodbye.

When the whole family reunites after Fester escapes an attempt on his life by Debbie, Debbie catches up with them and tries to have them all killed by electrocution.  But then, Pubert -after a crazy and hilarious chain reaction that gets him into action-, already back to his normal self, saves the family; Debbie gets pulverized herself.

Later, everyone gathers to celebrate Pubert’s first year.  Fester hooks up with Margaret and Uncle Thing’s new nanny, Dementia.  Joel and Wednesday have also hooked up, and when he tries to render tribute in front of Debbie’s grave, a hand emerges from below and grabs him; he screams, as Wednesday observes, smiling. 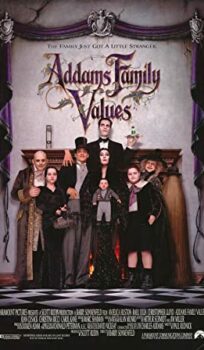