After finding out Em (Kristen Stewart) is having an affair with Mike (Ryan Reynolds) even though Em went to Mike to end it, James (Jesse Eisenberg) goes on a drive, drinking from a bottle of alcohol his dad left in the car. He winds up causing a substantial amount of damage to the car and when his mother finds out, she forces him to use ALL his money he made at Adventureland to fix it. His dad knows it was partly his fault but doesn’t speak up. To add insult to injury, his college buddy comes back from Europe to tell hiim that he decided to go to Havard instead of NYC, basically abandoning him.

James finishes up his stint at the park then decides to follow Em to NYC.

He finds her and reveals that he came to New York to get a job, then hopefully finish up his schooling after that. James and Em finally realize they love each other.

The film ends with the two getting ready to consummate their relationship (more specificially James losing his virginity to Em). 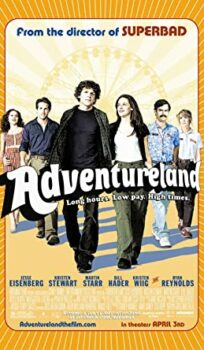