Longer version:
Wade’s relentless obsession with the theory that Jack Hewitt had something to do with the unexpected death of Evan Twombley (Sean McCann), earlier in the film, slowly unhinges him from reality and alienates him from everyone around him. Things start reaching a boiling point when he is fired after Jack complains about his non-stop harassment and he destroys developer Gordon Lariviere’s (Holmes Osborne) office in a fit of rage. Jill’s mother, Lillian (Mary Beth Hurt), vows to get sole definitive custody of the girl to keep her away from him. After getting into a pointless fight in a local bar, he comes home and discovers Marge is getting ready to leave him; he tries to convince her to stay, but it becomes a shoving scuffle in which even Jill is hurt and both woman and girl drive off, scared.

Glen comes out of the house and, in his usual, demeaning way, “commends” Wade for “finally doing it like a man and acting like his own blood”. Wade just scoffs at him and goes to the barn. When Glen comes from behind and hits him in the head with a bottle while ordering him “not to sass him”, a terrified Wade has a brief image of a younger Glen -recurrently seen in flashbacks throughout the film, abusing him- and retaliates by fatally striking him with the butt of his rifle, which causes Glen to fall to the ground, suffer a seizure and die. By this point, Wade has all but completely lost his mind and, upon realizing he killed his father, he reacts in a strange, cold way and resolves to just lay it on a table in the barn and set it on fire, which causes the whole barn to burn down, while he drinks and contemplates it.

The film’s conclusion shows Wade shooting in the back, and killing Jack Hewitt, while Wade’s brother, Rolfe (Willem Dafoe), narrates the subsequent events in voiceover. Wade presumably fled by crossing the border to Canada -where his vehicle was found, abandoned, a few days later- and never returned. Eventually, the entire town was made part of a ski resort, as a result of a joint venture between Lariviere and a wealthy developer who had been sponsoring him for it, but these events were never connected, in any way, to the mysterious death of Twombley and there was no resolution to it, either. Rolfe speculates that “the story will probably end when, one day, some vagrant looking like Wade turns up dead”. 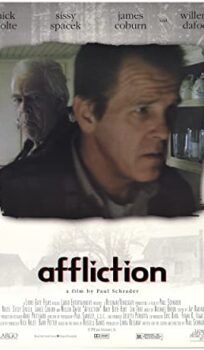