Cypher Raige (Will Smith) is an emotionally cold, military leader whose relationship with his son, Kitai (Jaden Smith), is fractured by the violent death of his daughter.

In an attempt to bond with his son, they travel together only to be marooned on Earth, which had been abandoned after centuries of environmental havok.  Now, with his injured father helping him from the damaged ship, Kitai must retrieve a beacon 100 kilometers away on a hostile planet with ravenous beasts, freakish weather patterns and a monster that can smell his fear.

Kitai succeeds, saving the day and earning his father’s love and respect. 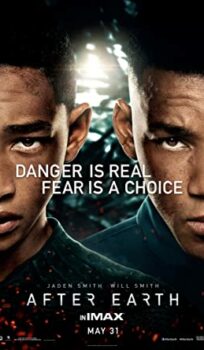